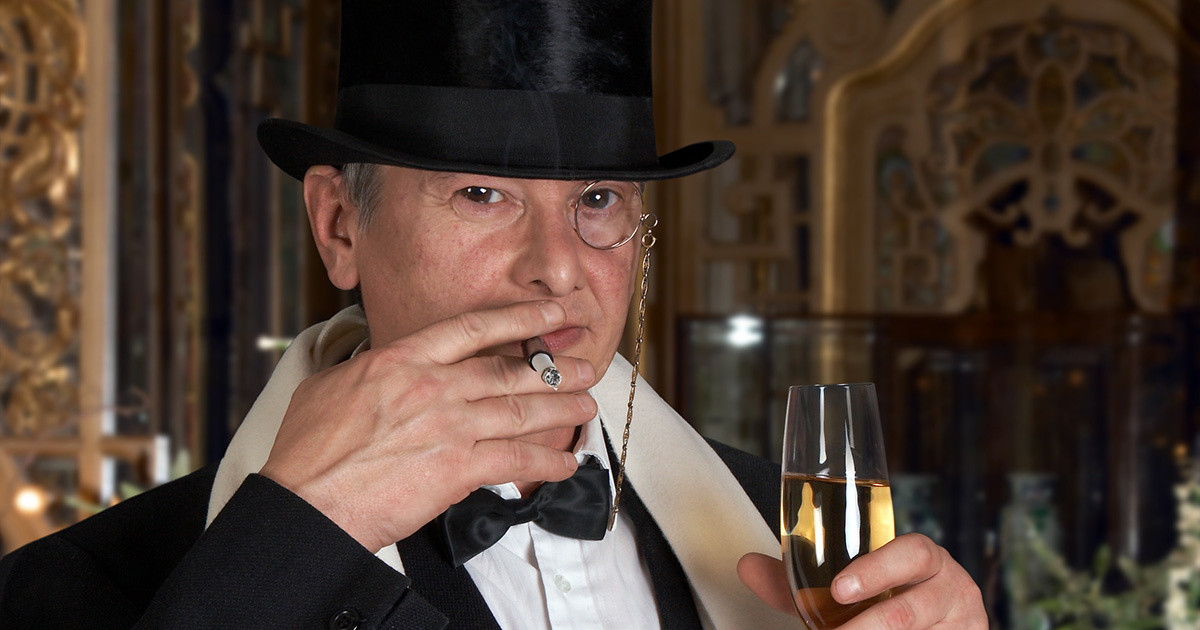 LOS ANGELES — Archibald Van Heusen III’s shock upon seeing a guest in full punk regalia at a Getty Museum fundraiser caused his monocle to drop into his lobster bisque, waitstaff at the $10,000 per plate gala confirmed.

“My wife Beatrice was beside herself, she ended up pulling a muscle in her hand from clutching her pearls so hard,” said the still fuming oil magnate as he lit a cigar with a one hundred dollar bill. “We were assaulted by the stench of body odor and cheap beer from across the dining hall. Several attendees swooned upon being subjected to the profanity that this miscreant was spouting. In the commotion, my favorite cumberbund was spattered with béarnaise sauce! Why such an uncouth, foul-mouthed louse would ever be allowed within a mile of this hallowed institution is beyond me!”

Newly wealthy punk Ronnie Grabowski saw nothing wrong with his behavior at the soirée, where he surprised many by being one of the evening’s biggest donors.

“I was there ‘cuz my accountant said I needed to do some tax write-offs or some shit,” said Grabowski. “I’m just trying to figure out what to do with all this money I inherited from my rich uncle. He hated everyone in the family—except me, for some reason. His final ‘fuck you’ was to leave everything to me. So I guess I’m a fucking billionaire now. But I’m not going to let that change me. I’m still going to dress punk, go to shows, and spit in cop cars. I’ll probably stop getting furniture from the sidewalk, though.”

“Going from broke to multi-millionaire can be tough,” said Cleese. “My clients include TikTok stars, successful YouTubers, and yes, even punks who’ve inherited a fortune. It can be challenging for them to assimilate into the upper crust while maintaining their identities. They often come from under-priveleged backgrounds, so I help them to avoid what’s known as ‘Beverly Hillbillies Syndrome.’ For instance, I understand Mr. Grabowski used his salad fork to comb out his mohawk at the table. While I’d never want to curb my clients’ freedom to be who they are, I also try to gently guide them toward more acceptable behavior.”

At press time, Grabowski was in the process of converting his late uncle’s megayacht into a floating all-ages venue.