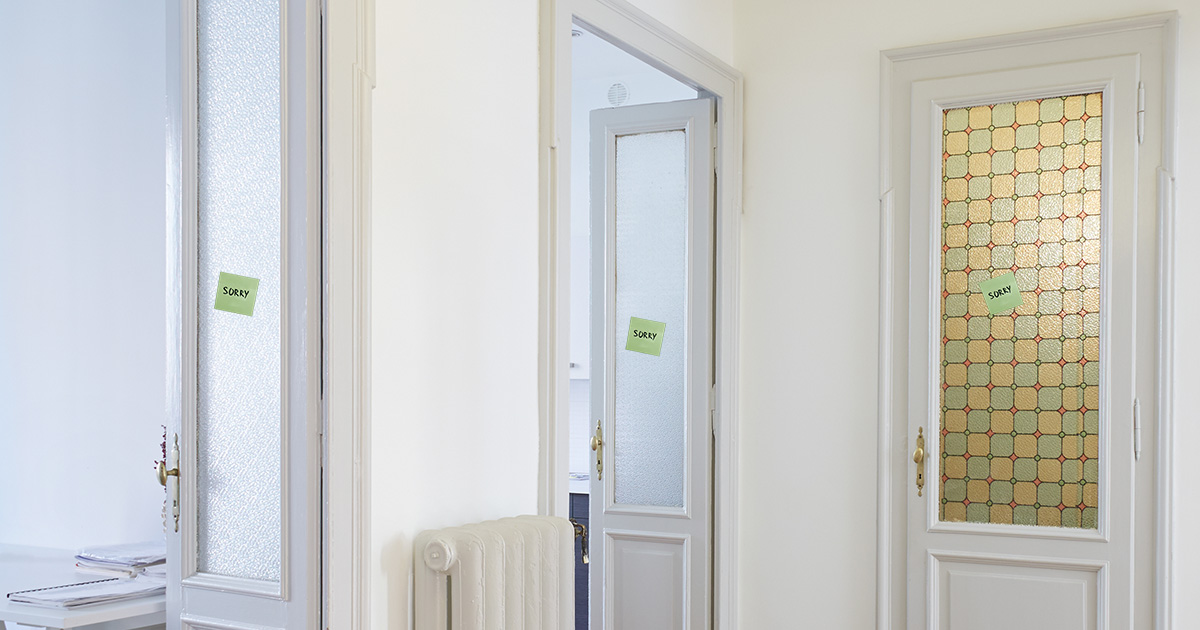 PORTLAND — Anxious roommate Megan Styers allegedly adorned every door in her house with a post-it note bearing only the word “sorry,” “just in case anything is weird or anything,” according to irritated sources.

“Megan’s actually a pretty good roommate — we don’t see her much, and she never makes a sound. She’s definitely cleaner than the rest of us and she always makes sure the trash goes out,” roommate Nina Holcomb said. “I mean, if no one else takes it out, she’ll take it out, even if it’s 5:30 in the morning, and she’s never once asked us to try to remember. Most of the time she washes dishes or vacuums before anyone can even get to them. I can’t imagine what she would apologize for, but I can count on things being unnecessarily weird around the apartment for at least the next two weeks, so that’s a relief.”

Psychoanalyst and handwriting expert Marsha Kerns said the formation and spacing of the letters indicate a pattern of repeated and meaningless distress.

“The subject clearly uses the written apology to self-soothe, and by visually marking every door in the home she has preemptively created an environment wherein no one can logically become angry with her because she has already apologized,” Kerns said. “As far as defense mechanisms go, this one is a remarkably effective if sad form of self-preservation, which is evidenced by the total confusion experienced by those to whom she’s apologized.”

Interestingly, Styers’s Tumblr following has nearly quadrupled since news of her postings became public, with one follower, tears_for_tears, co-opting Styer’s methods in their own home.

“I already scheduled my classes and work around never having to interact with my roommates ever again,” the devotee said. “And now with the Megan Method, as I like to call it… I hope that’s OK… anyway, I don’t have to let my anxiety control me. I’ve taken control of my anxiety through nothing more than debilitating codependency and angering passive aggression. And I’m allowing it to conduct all my social activities for me. Life has never been better.”

“Sorry if that’s not helpful,” they added.