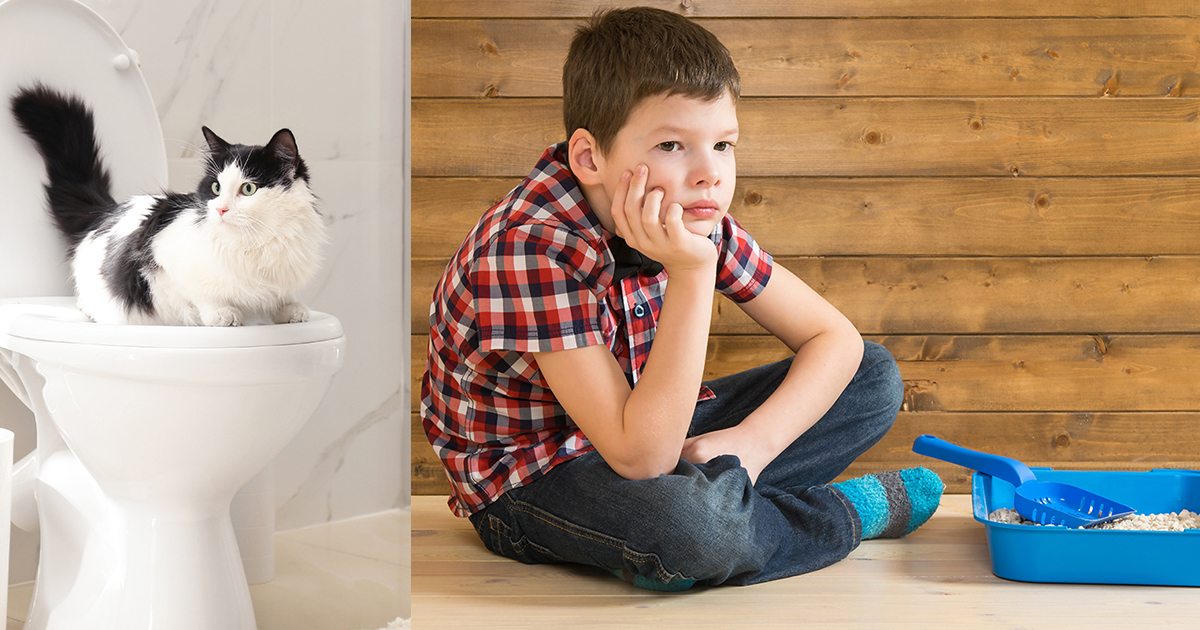 Parenting is a lifelong journey, and every day brings new challenges. I just try to do what’s best for my babies. Sure, I made some unconventional decisions — not every parent toilet trains their kitten and litter box trains their toddler. But everyone thinks they know how they’ll raise their little ones until they adopt a kitten from PetSmart, and all their best laid plans go to shit.

Look, I never thought I’d be THAT parent. I laughed with the rest of you when cat moms bragged about how they trained their precious fur babies to drop a post-Chunky Chick’n Liver D’Light deuce in the big boy toilet by the early age of 22 months. But then my little bundle of fur and fangs looked up at me for the first time, and in my heart I knew I could never force Mr. Greggory McFluffington to defecate in a box of dusty pebbles like some common house cat.

Greggory was a natural on the toilet. Every poop landed perfectly in the water pooled at the bottom of his porcelain throne. His father and I were so proud, and we knew it was time to add another little one to our family.

A year later, I gave birth to our human son, Greggory. It occurred to me that since the unconventional parenting methods we used for feline-Greggory worked so well, maybe I should look into alternative options for human-Greggory as well.

I did my research and discovered that litter box training is actually the best option for human-Greggory. It turns out squatting is the healthiest way for humans to poop! That’s just science. Also, by the time human-Greggory was old enough to be potty trained, there was no available bathroom where he could do his business (feline-Greggory is territorial), but there was an unused litter box in the closet.

Look, what it comes down to is, when feline-Greggory decides that something is his, it’s best to just let him have it. I’ve got plenty of scars that can attest to that. Even my husband and I have a hard time getting toilet time without a little blood being drawn, and I just don’t think human-Greggory is ready for that. It’s just better this way.

So here they are: a cat pooping in a human toilet and a toddler pooping in a box of dusty odor-absorbing pellets, just as God intended. And if anyone’s worried that I’m setting human-Greggory up to fail in the real world, he’s a smart kid. I’m positive he’ll teach himself to poop in a human toilet in his preschool’s bathroom, provided that the preschool’s bathroom is not also the claimed domain of an extremely aggressive feline.