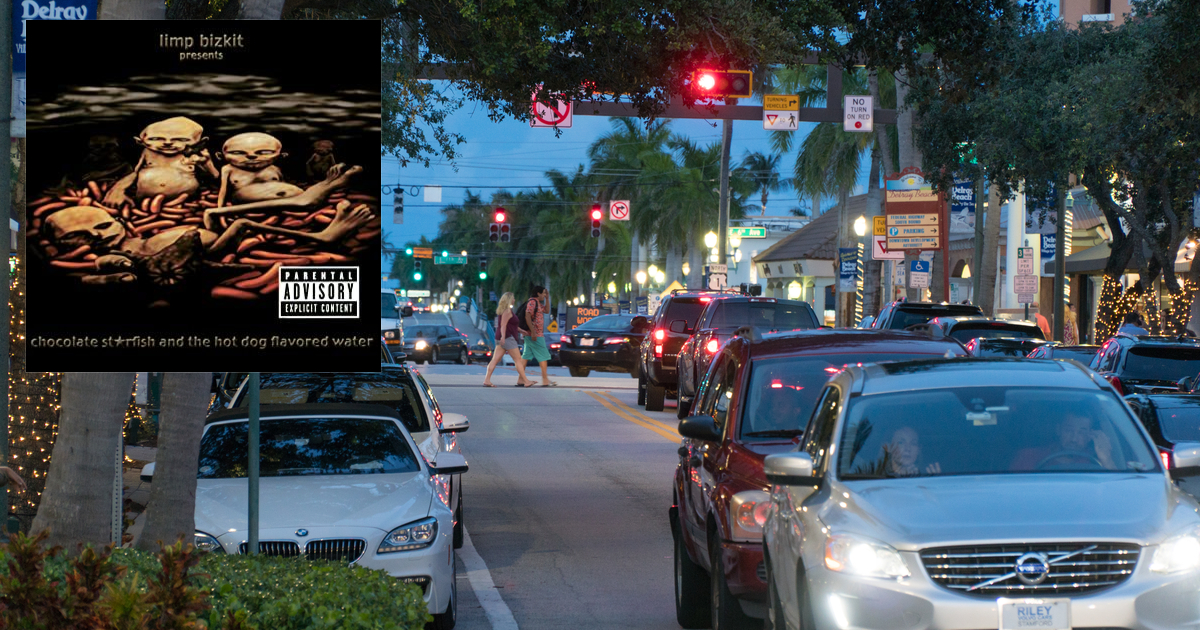 Some albums are so transcendent and groundbreaking that they cannot be appreciated until decades after their release. Is Limp Bizkit’s “Chocolate Starfish and the Hot Dog Flavored Water” one of those seminal works of art? Fuck no! But I’m in an Uber in Florida so this is my life now.

In retrospect, I overlooked some major red flags about this ride. It wasn’t until a dented 1996 Ford Taurus rolled up blaring “My Generation” that I realized I hadn’t looked very carefully at the driver I’d been matched with. Reopening the app, I found myself asking some very concerning questions. Does this guy actually spell his name “Gjeff?” How can his Uber rating possibly be a 1.9? And why is his profile picture just the poster for the movie “Freddy vs. Jason?”

But seriously though…”Gjeff?” Dude, what the fuck?

Eh. When in Rome, do as the Romans do. Or, in my case, the Orlandonians. And apparently, the thing to do in Orlando is listen to nu-metal albums all the way through without even skipping the goddamn skits. But if listening to Fred Durst hand out life lessons such as, “Hey kid, take my advice/You don’t want to step into a big pile of shit” gives Gjeff the strength he needs to deal with Florida drivers, then more power to him. Most of the cars here look like rejected designs from “Pimp My Ride” and we just got passed by a woman that looked like Guy Fieri doing 120 on a Ducati.

Much like Gjeff’s collection of bumper stickers, “Chocolate Starfish” offers a little of everything. Looking for a song that uses the word “fuck” 46 times? Give “Hot Dog” a spin. Curious what it would sound like if a Papa Roach cover band wrote the “Mission: Impossible” theme song? It’s called “Take a Look Around” and it’s track 10. Yearning for a 10-minute outro featuring recorded voicemail messages from Ben Stiller, Stephan Jenkins, and Mark Wahlberg? That’s on here, too if you’re into that sort of thing you sick fuck. Get help.

Although I never asked to revisit an album named after a butt hole and the world’s worst LaCroix flavor, I actually have a newfound begrudging appreciation for “Chocolate Starfish.” Like my man Gjeff, I give it 5 stars and pray to God I’ll never encounter it again once I get the hell out of Florida.

Now if he’d been bumping “Three Dollar Bill, Y’all” front to back I’d still be in that Uber right now screaming “Counterfeit!” with my new best friend, Gjeff.