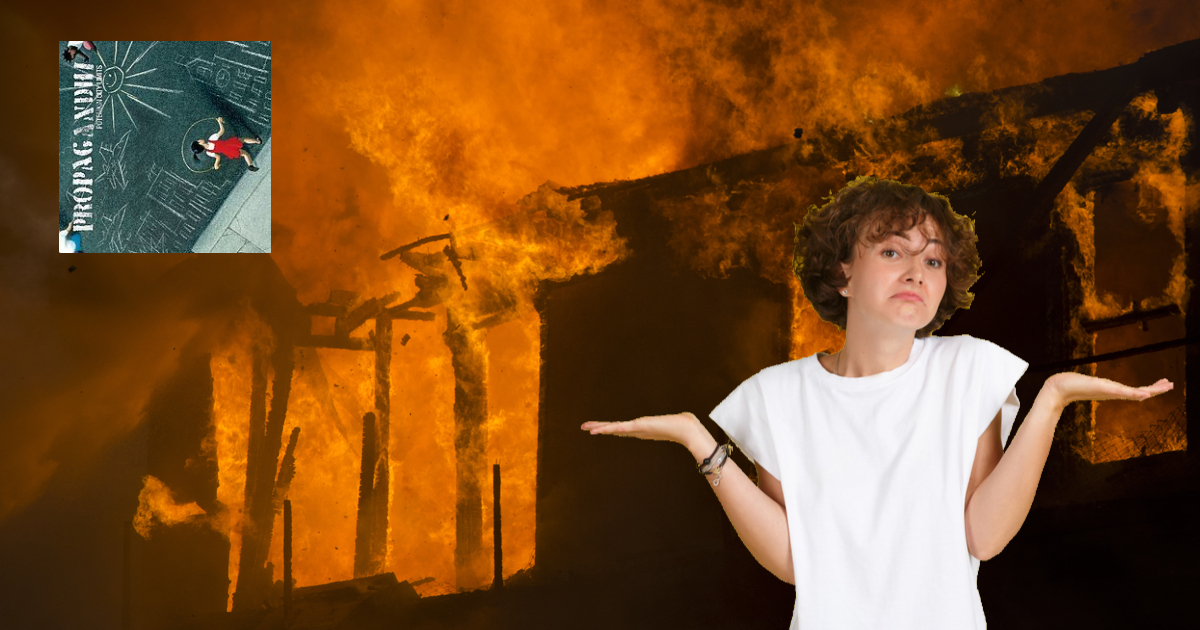 In these politically-charged times, nothing quite gets the punk heart pounding like politically-charged melodic hardcore and no one does that better than Canadian punk legends, Propagandhi. The band is responsible for so many anthems for the marginalized, underrepresented, and oppressed. Admittedly, we haven’t listened to Propagandhi in a hot minute so we put on on the album “Potemkin City Limits,” blacked out, and came to 6 tracks later, holding a blow torch and looking up at a flaming Wells Fargo. Here’s our album review!

It opens with “A Speculative Fiction” and God DAMN, this song still slaps. About halfway through the song, we got the first urge to exercise since quarantine started. “We’ll take the whole fuckin’ world down! Down with us in flames!” Hell yes! That’s the last thing we remember before feeling the heat of the flames of justice.

This track leads into “Fixed Frequencies,” which we have no memory of. Our girlfriend told us we started bashing our head against the front door for a few seconds because “the drums are just THAT good. Did you hear that part, let me rewind!” We vaguely remember singer/guitarist Chris Hannah’s voice ask “When did punk rock become so safe?” but we’re not sure if that was a lyric or if he was the one who gave us the blow torch.

Suddenly, the smell of gasoline. We opened our eyes and realized we were already standing up. Someone to our left was waving a red gas canister, dousing the corner of a building. We were holding the aforementioned blow torch that Chris Hannah may or may not have supplied. We looked up and saw some yellow letters on a red background, but our vision was still coming into focus. “But in every war waged / Only kings emerge unscathed.”

We lit that fucker up. Instantly, the building went up in flames. The second “L” in “Wells Fargo” was the first letter to fall right before the sign disintegrated. We mimed the guitar solo in “Die Jugend Marschiert.” We were lightheaded.

Rockin’ fuckin’ album. 10/10. This was way better than the time we listened to “How to Clean Everything” and straight-up fell asleep.