We Interviewed Rave Culture Icon the Cat in the Hat 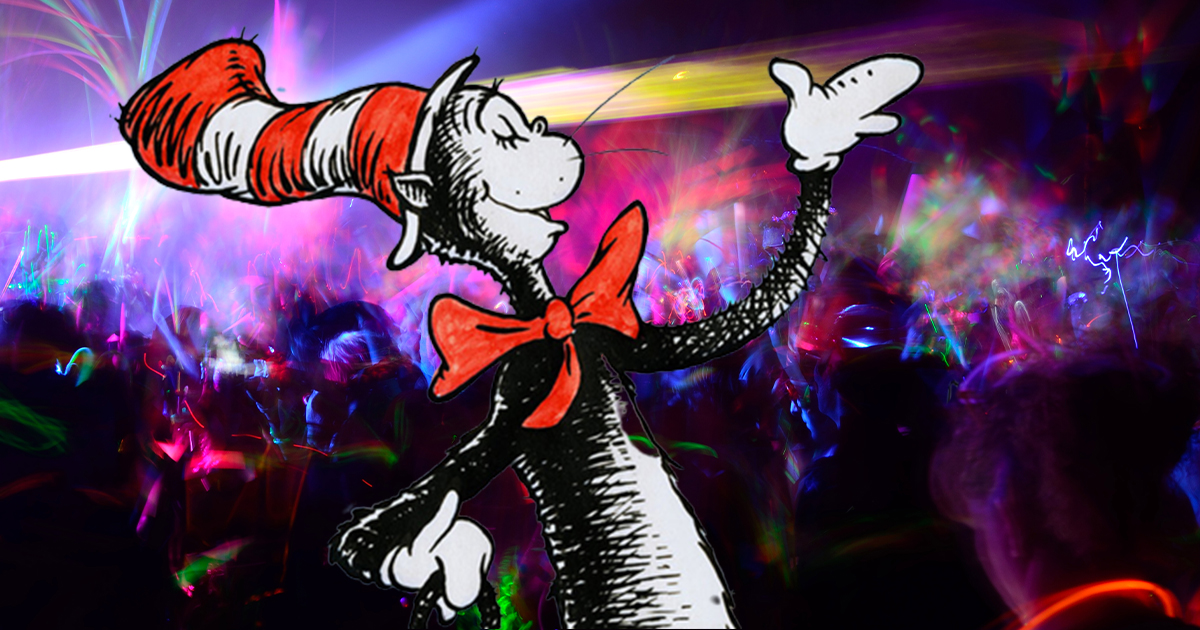 Rave culture: the annoying byproduct we all have to deal with so that New Order can exist. Still, there are certain touchstones to emerge from the scene which we at The Hard Times feel obligated to acknowledge. So we sat down with Theodor Geisel’s fictional feline, The Cat In the Hat.

Mostly we just wanted to know why everyone wore that stupid hat.

Hard Times: Thank you for taking the time to speak with us Mr. In the Hat.

Cat In the Hat: Huh. Yeah, sure. Can I have a glass of water?

Fine. You’ve been a massive influence on the rave scene from its earliest days. Is there something specific you can attribute that to?

You mean, besides the hat?

Yes. Something other than the hat.

Well I’m not really proud of this, but I was the one who first introduced ecstasy into those first electronica clubs.

Really? You did that?

Of course. Man I was a real mess back in those days.

Oh yeah! It must have been a real wild time.

Oh sure. I’d spend my nights flopping around in my tall striped hat and my crazy big bow tie.

But then by day, I’d be so sleep deprived and dehydrated that I just end up crashing at random houses and causing chaos. Sweet Jesus! Sometimes there were children around and they’d get caught up in the whole thing. It was dark, I tell ya. Really dark.

Right. Sure. Sounds like a bummer. So anyway, what’s with the hat?

You didn’t actually listen to what I just said, did you?

What? No yeah we uh, you’re sober. Cool. What made you hit bottom? And id it involve the hat?

It was 2008, I was at a Schoolastic Fair book signing in Atlanta with Nancy Drew. Out of nowhere she turns to me and says “I bet I could snort your furry ass under the table. Most of that weekend is a blur now but the ambulance bills confirmed I burned through 4 of my nine lives in two days.

Speaking of numbers, are you still close with Thing 1 and Thing 2?

Oh boy, uh, no, I had to cut ties with the Things. I’ll always love those guys but the dynamic we had just wasn’t healthy. Never mix kink play with mescalin kids.

Well it’s great to see you healthier these days, and you have a book of your own coming out don’t you?

Yes Sir, it’s called “The Cat in the Hat Knows a Lot About Jack: A Memoir of Hubris and Destruction.”

You wouldn’t happen to still have an E hookup would you? Our guy got shot at Burning Man last year.