Top 5 Merch Guys to Watch, Like, They’re Probably Skimming the Till 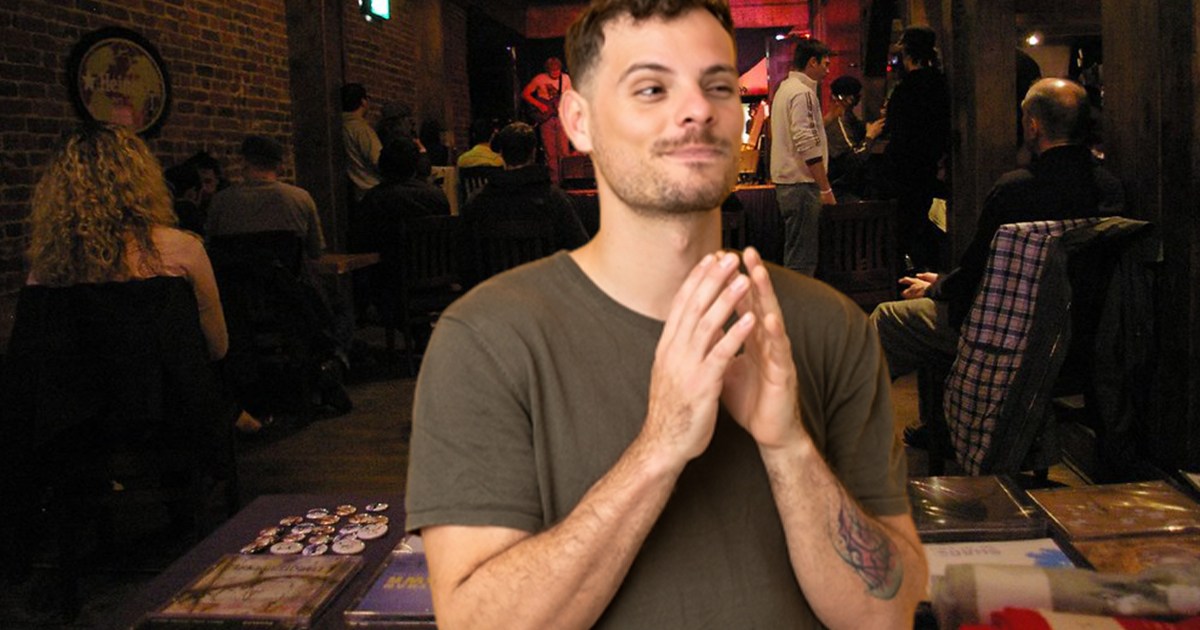 For most DIY bands, merch is a $630 per year industry, and growing when you don’t factor in inflation. Musicians on the local/small tour level depend on that money to cover travel expenses, guitar strings, and the occasional gram of weed. With so much riding on this crucial stream of revenue, it’s important to hand the cash box over to someone you trust.

Finding someone dependable whose available and willing to work extremely limited late-night hours for $20 and/or some beers is a dubious prospect. In an industry riddled with flakes, drug addicts, and psychopaths, one wrong choice can cost your band dozens of dollars in a single night.

We’ve compiled a list of the top 5 merch guys that you’re going to want to keep your eye on, as in they are shady like they will for sure steal from you.

Trevor Marsden
Ever since Trevor retired from his job as a barista at the age of 27 due to anxiety and a mysterious wrist problem his “fascist” doctor refuses to verify, he’s been more than happy to “help” local bands. Trevor is too much of a coward to steal money directly, but he will give any potential customer an ear full about how fucked up it is that they’re willing to spend $20 on a t-shirt when he’s about to get evicted.

Alex Peters
A master manipulator and 5-time amphetamine overdose champion, Alex is a merch guy you wouldn’t wish on your band’s worst enemy’s band. At the end of the night, he will hand you a cashbox with less money in it than when you handed it to him. When you confront him on this he will bombard you with excuses so frantically that for a minute you will actually believe his claim of “the math is all fucked up,” and after that minute he will be long gone.

Kelly LaPointe
Kelly is the only #GirlMerchGuy to crack our top 5, but don’t let that make you trust her! Kelly is a single mother, and if she thinks you’re about to confront her about missing money she’ll tell you exactly how hard that is before you can get a word out. It is indeed hard not to sympathize with her struggles, save for the fact that the amount of kids she claims to have keeps changing and she always seems to have cocaine.

Shifty
It’s no surprise that Shifty wound up on our list, given that he goes exclusively by “Shifty” and no one knows his real name. Plus he stabbed a dude. Don’t hire Shifty.