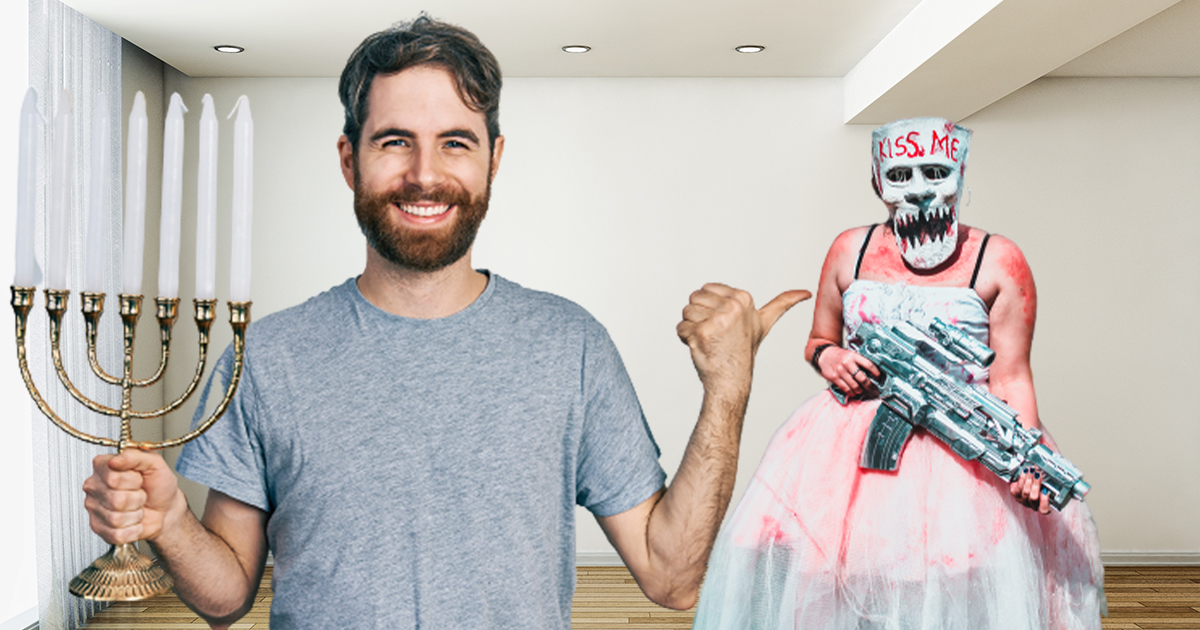 In the two years Tyler Croft and Kayla Duggan have been dating, they’ve already learned one of life’s biggest lessons: true love conquers all. That’s how this couple manages to navigate the holiday season even though Tyler celebrates Hanukkah, the Jewish Festival of Lights, and Kayla celebrates the Purge, the blood-drenched night during which all crimes are legal.

They say opposites attract, and that surely seems to be the case with these two lovebirds. Tyler grew up with many of the hallmarks of a Jewish upbringing – he had a Bar Mitzvah, fasted for Yom Kippur, and regularly attended synagogue. Kayla, on the other hand, was raised in a chaotic, ruleless household whose only familial tradition was the 12-hour-period each year in which they came together to loot local stores, deface public property, and straight-up murder anyone who got in their way.

As you might imagine, these cultural differences can be a lot to handle. But, although they grew up with different customs and beliefs, Tyler and Kayla are now creating their own unique holiday traditions together. She doesn’t mind having his great grandparents’ menorah on display on their mantel, and he’s happy to indulge her by spending one night a year hunting homeless people in the streets with a crossbow.

It’s not always easy keeping the in-laws happy, of course. Tyler’s mother has often questioned if her baby boy is really sure he wants to settle down with a girl whose idea of holiday decorations is mounting a motion-activated flamethrower to the front porch. And Kayla’s parents, although they get along well with Tyler’s family, have been noticeably reluctant to promise not to kill them.

As Tyler and Kayla’s relationship grows, they’ve even started to have serious talks about raising their future children. What values will they teach them? What rituals will they observe? Will they send them to Hebrew school or will they spend their Sundays donning ski masks and practicing armed counter-offensives in an abandoned steel mill?

Surely, this lovestruck couple will figure it all out when the time comes. For now, they’re content to spend the holiday season together, eating latkes, spinning dreidels, and pistol-whipping any motherfucker dumb enough to wander the streets on Purge Night.