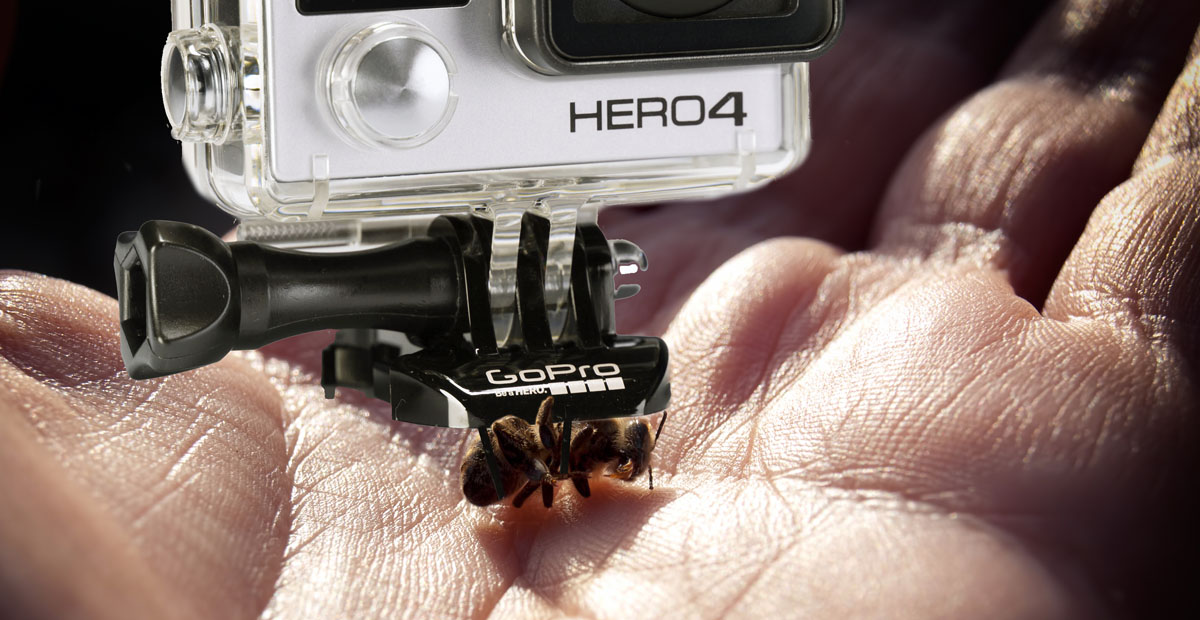 Bees: They’re one of the most important components of our delicate ecosystem. Bees naturally pollinate the crops that human beings depend on for food, a job they do thanklessly. In the wake of global climate change bees have been dying off en masse and it is hard to pinpoint the culprit. Some people have proposed that cell phone radio waves are making it more difficult for bees to do their job, others say the warming of the planet is creating an environment that is toxic to bees. We decided to figure out the problem firsthand. We put a GoPro on a bee and did a little investigative journalism.

The findings? GoPros are killing bees.

The proportions and dimensions of a bee make flight nearly impossible for the little critters. Now throw in a six ounce portable camera and that bee better forget about comin’ home to his little buzzing wife and kids. GoPros are easily the most destructive force in a bee’s life — I mean, they’re REALLY just mashin’ up those bees! You gotta look at this footage! Forget global warming, people need to stop hitting bees with cameras!

With the GoPro nature has constructed a near perfect bee killing machine.

We thought, as scientists often do, maybe this was a fluke. Maybe we miscalculated a variable or forgot to carry a one somewhere. So we bought another dozen GoPros. Let me tell you, oh man, these cameras HATE bees. I’m talkin’ no survivors, game over man, Mortal Kombat fatality.

Related: We Asked Experts: Will My Children Be Able to Barter My Record Collection for Fresh Water After the Environmental Apocalypse?

It was like the Triangle Shirtwaist Factory Fire but for bees. You remember that scene in Indiana Jones where he escapes from the boulder? Now imagine that he didn’t escape from the boulder and also his entire hive was destroyed by the boulder and then I had to make a note every single time that happened and it happened 12 times in a row.

We must have spent the entire afternoon just squishing bees with cameras. I had to buy a book on how to cope with all this bee viscera on my hands. Clearly there is some kind of bad blood between cameras and bees. Maybe the bee stole the camera’s girlfriend, or something. I don’t know. I don’t think I’ll ever know again. I can’t get the sounds of their little screams out of my head. I… I’m just so tired. Tired from all those bees I had to kill. For science.

Anyway, be sure to read my next article, where I attempt to answer once and for all why dogs do not like the taste of chocolate.