We Revisit Pet Sounds by the Beach Boys and by We I Mean Me, Alone, Like Always 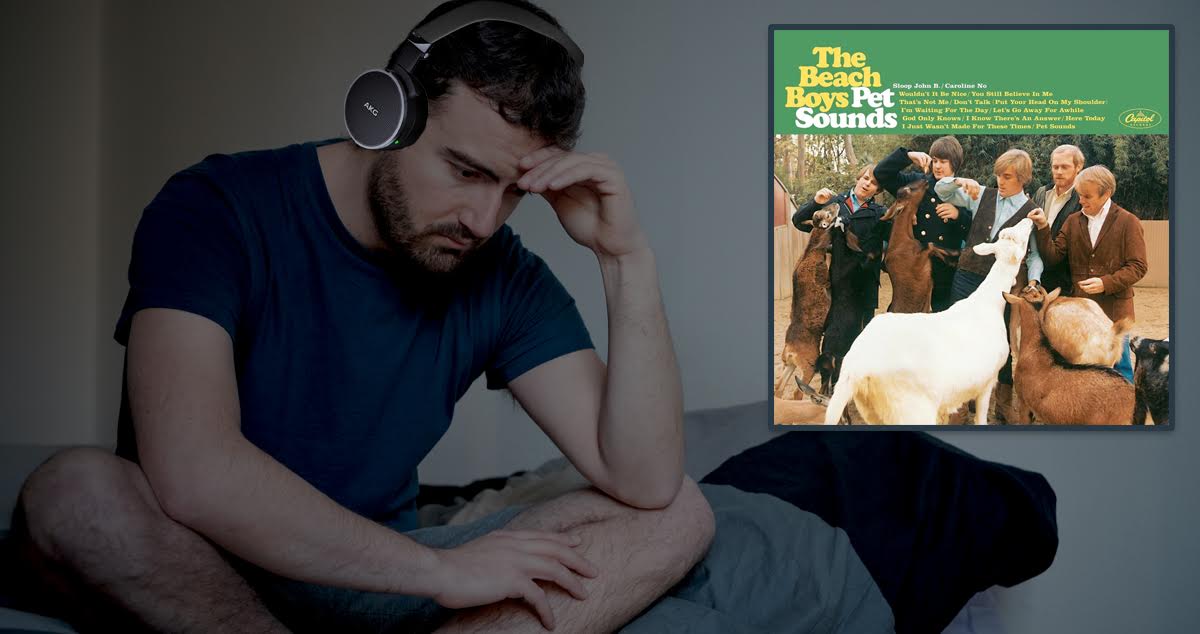 Today we’re taking a look back on one of the most influential rock albums of all time, Pet Sounds by The Beach boys!

Let me clarify. By “we” I am referring to three people. Namely me, myself, and I. Oh, yeah. The gang’s all here. Let’s do this.

Though officially credited as a Beach Boys album, many consider Pet Sounds to be a Brian Wilson solo project. In this respect it’s sort of like my entire life. Sure, on paper other people are involved. Family, peers, a network of “friends.” But at the end of the day it’s just one guy sitting in an apartment listening to records writing a Hard Style post. And that’s fine!

Pet Sounds opens with perhaps it’s best single “Wouldn’t It Be Nice,” a bombastic song that steps right on the gas of the albums landmark ‘wall of sound’ aesthetic. Co-written by lyricist Tony Asher, this song is an ode to the pains of youth. Its central character lamenting about experiencing a love he knows he’s not old enough for. Hearing it now I can’t help but think of a few other things that would be nice. Like, wouldn’t it be nice if I wasn’t the only person I knew who thought sitting around listening to Pet Sounds on vinyl would be a fun group activity?

“You Still Believe In Me” starts up with a hauntingly atmospheric intro that Wilson created by plucking a bobby pin on a piano’s strings, a testament to the sort of innovation one can accomplish when years of drug use and introversion have isolated them into a kind of existential vacuum.

If you’re anything like me you’ll find it and the two following tracks (“That’s Not Me” and “Don’t Talk”) to be the perfect soundtrack to frantically double and triple checking that you haven’t accidentally missed a text from any one of the many, many people you reached out to about hanging out tonight. Then again, as is becoming devastatingly clear, no one is like me.

Related: It’s Time to Have a Conversation About How Lonely I Am

Concluding side A, “Sloop John B” is a cover of an old standard from the Bahamas with some inventive… holy shit my cat just came home! She’s been gone for weeks! Well, Ms. Whiskers for one agrees with me that the inclusion of a supertonic chord on this track is a shining example of what sets Pet Sounds apart from similar albums of the day like Sergeant Pepper’s Lonely Hearts Club Band.

OK, you know what this is not my cat. Whatever, she seems cool. Or he. Whatever.

That brings us to the B side, leading off with “God Only Knows.” The melodic hook “God only knows what I’d be without you”… you know what, let’s skip that one.

This has got to be the most bored looking cat I have ever seen. If asked to describe this cat the first thing I would think to say is “noticeably bored.”

“I Just Wasn’t Made for These Times” is a song with heavy themes of… ready for this? Drum roll please… depression and social isolation! Wow! Blowing my mind, Brian Wilson! Blowing my fucking mind!