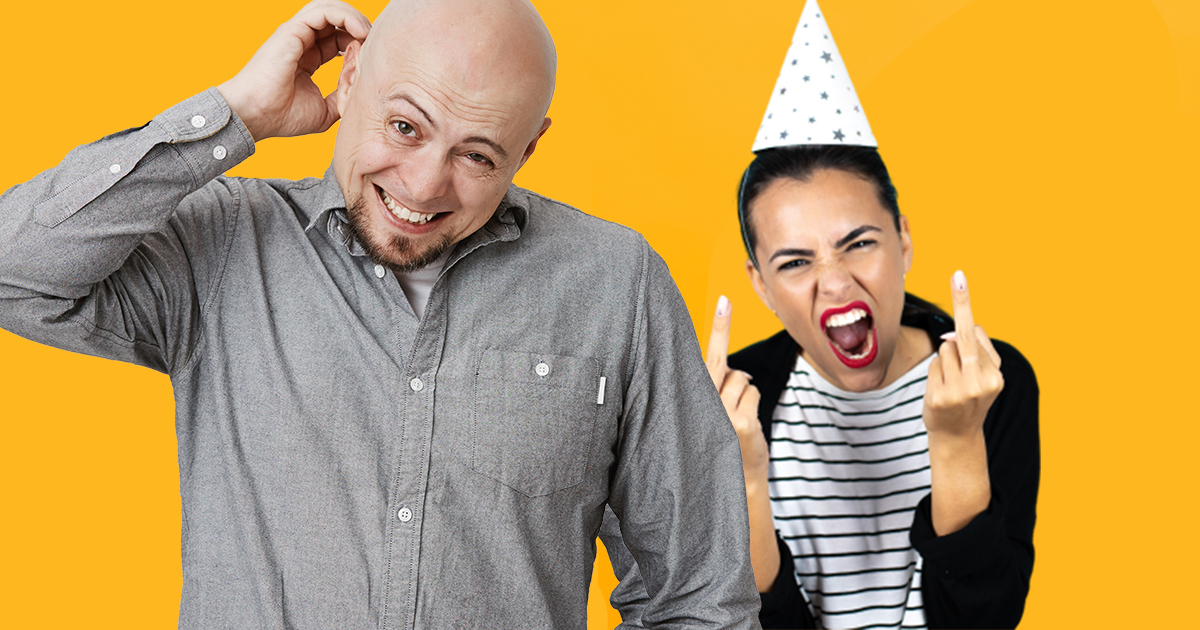 Girlfriends are always trying to fix you. Eat healthy. Get your GED. Don’t forget my birthday. At a certain point, you have to start living the way you want. And if that means celebrating your girlfriend’s birthday panicked and a week late, you’ve got to be you. Still, your girlfriend will be expecting some sort of explanation. That’s why we’ve collected this list of 10 ways to make it way, way worse.

Each of these verbal flagellations is guaranteed to get her mind off her birthday and onto why she’s with you in the first place. Let’s make this a birthday she’ll unfortunately never forget!

1. Convince Her You Had the Dates Mixed Up with Your Ex’s Birthday
Wait, wait. It’s not that you forgot. You just thought it was coming up later because you were thinking of your ex’s birthday. No, not thinking of your ex! Thinking of her birthday! This is coming out wrong. It’s just that it’s hard for you to forget your ex’s birthday since you always did something fun for her, ya know?

2. Tell Her You Don’t Believe in Birthdays, Like Ideologically
What even is a birthday? Why should society and Hallmark get to dictate what you celebrate? She’s entitled to her own beliefs, so it’s fine that she makes you feel special on your birthday, but you shouldn’t be forced into traditions you don’t want to follow. It’s a matter of principle. First you’re buying birthday cards and then it’s Flag Day cards and Columbus Day cards—it’s a slippery slope to you celebrating the father of colonialism in the Americas. Is that what she wants?!

3. Blame It on the Supply Chain
Listen, a lot of things are getting caught up at the ports right now. With mass employee shortages and shipping challenges, she can’t just expect every single “Happy Birthday” to show up on time. It’s not like you can wish her a happy birthday with your gift hypothetically stuck in Tuscaloosa. Your new gaming chair is stuck in shipping, but are you complaining? Everyone is struggling. How she can even think about celebrating during these grim times…

4. Give Her a Stack of Cute, Handmade I-O-Us Like a Child
You know what women love? Bespoke non-gifts. Why offer a single disappointing gift when you can spread a series of sad reveals out over a long time? A 5-minute back rub, breakfast in bed, a day at the spa that’s really just you putting cucumbers over her eyes and playing the pan flute — there are endless ways to avoid putting any real effort into this.

5. Tell Her You’ve Been Out of Whack Since the Mayan Calendar Ended
Oh no, did it happen again? Ever since the Mayan calendar ran out in December of 2012, your date book has been a complete mess. Not one to conform to the white man’s Gregorian calendar, you rely on pre-Columbian Mesoamerican time measurements. But as you’ve been largely making it up for the past 9 years, you must have miscalculated. See, you thought her birthday was on Chicchan but actually it was on Cib! This is really embarrassing, but that’s what happens when people refuse to adopt the 18-month calendar.

6. Forget Again
You already forgot once… so what’s to say you can’t forget again? Just keep going on with your life acting like everything’s normal. Sure, she may hyperventilate from all the pointed sighing, but as long as you don’t ask what’s wrong and she bottles it up into a silent, simmering rage, you’re in the clear until next year!

7. Offer to Do Some of the Chores You Usually Make Her Do
Let her kick up her feet and enjoy a day of sumptuous relaxation as you make an unmissable 4-hour show of doing all, or at least some, of the chores she does on a daily basis. Naturally you’ll need to do them wrong, so as to be deemed incapable of carrying this out regularly, but not having to lug the trash down three flights of stairs for once will be like a tropical vacation for her. Just don’t get used to it, Miss Queen-for-a-Day!

8. Gently Suggest It’s on Her for Not Reminding You
Not to point fingers, because really no one’s at fault here, but if one were prone to blame, there might be an argument to be made that she’s the reason you forgot in the first place. If she had reminded you a couple times a day for the past two months, you almost certainly wouldn’t have missed it. And not to lay it on too thick, but she also forgot to remind you about your mom’s birthday this year. So this is the second time her not reminding you has gotten you in hot water. But you’re big enough to not make her feel bad about it, so let’s just move on.

9. Feign Dementia and Really Commit
For this to work, you’re going to need to start sprinkling in the symptoms. Leave a burner on. Forget your best friend’s name. Wander around the neighborhood and wind up in someone’s backyard. Eventually she’ll put together that something is horribly wrong and attribute that to why you forgot her special day. Then all you have to do is keep up the ruse for the rest of your life.

10. Break Up
How better to get her off your back about the birthday thing than to shift her focus toward a breakup? It’s the perfect deflection. Now her missed birthday will be the least of her concerns. Plus, you don’t technically have to deal with any of it, since you’re taking some time to really get to know yourself—with other people. It’s a win-win!