HEARTWARMING: This Little Boy Asked Santa What HE Wanted for Christmas, and Santa Begged for a Quick Death to Free Him From Eternal Servitude 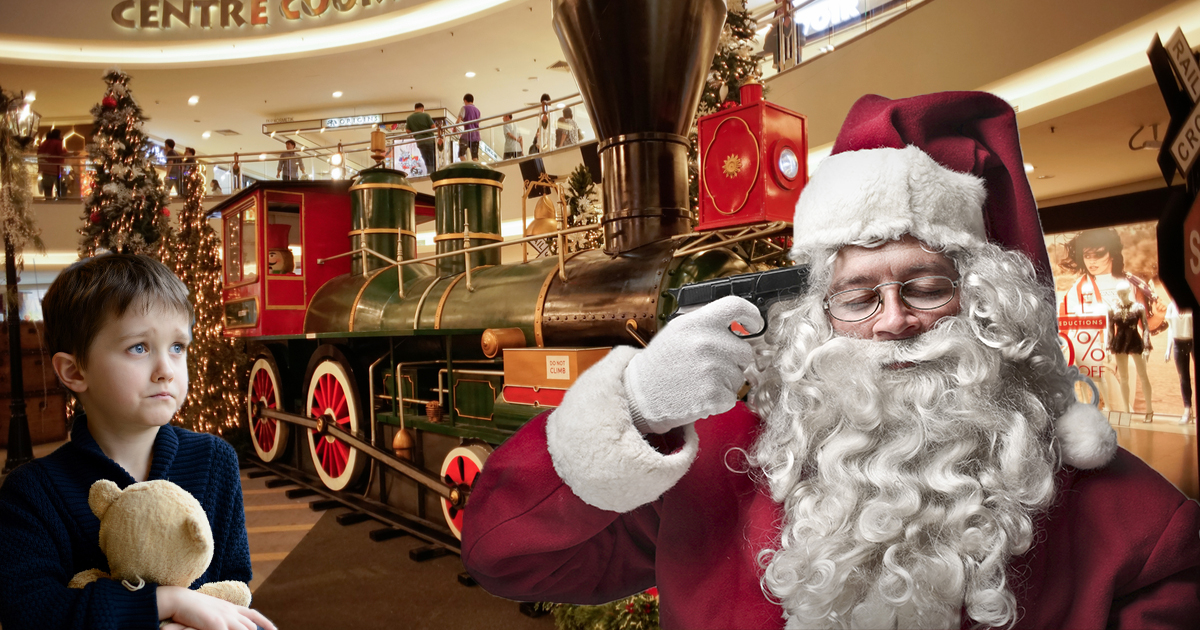 Pere Noel. Kris Kringle. The Winter Easter Bunny. For centuries, children have lined up to meet Santa Claus and ask him to fulfill their every holiday wish. But has anyone ever asked Santa what he wants? A thoughtful Ohio boy did exactly that. And the alarming incident that followed has left every person in attendance scarred for life.

“I long for an eternal, dreamless sleep!” explained old St Nick with a twinkle in his eye. “Oh how I wish I could die! Ho, Ho, Ho!”

The apple-cheeked Ohio boy, who requested to remain anonymous (a request we denied), explained how the ugly incident then got much worse.

“I could see that I made a horrible mistake” explained 10 year old Sammy Winston of 221 Baker Street, Mapleton, OH. “I tired to just laugh it off and ask for an Xbox One like all the other kids. And then he leaned in real close and whispered ‘but, you already have the greatest gift of all, you will die someday.’ which I never really realized till just then. Jesus Christ, I just wanted to score some nice points!”

Santa explained that his mystical predicament essentially makes him a slave, forced to deliver toys to good children in exchange for “piss-warm milk and some bullshit store brand Oreos.” That, combined with the drudgery of living at the frigid North Pole leaves him longing for death.

“It wouldn’t be so bad if I actually had something to do throughout the year, but the fact is the elves take care of all the toys. I work some mall gigs, Christmas Eve, and that’s it. There’s no internet at The Pole, No TV, nothing. And there’s only so many times Santa can pull his jolly ol’ pud before even that gets boring.”

In a stunning turn of events, Santa then pulled a Glock 23 from his waistband and fired a shot into his forehead. The bullet penetrated nary a bone, only causing his belly to shake like a bowl full of jelly. Then with a wink of his eye and a tap of his nose, Santa fastened a noose from a string of Christmas lights.

“Honestly I thought he was just a guy in a suit” admitted young Winston. “Now I know Santa is real… does that mean God is real? My whole cosmology is fucked.”

As of press time, Santa’s public relations elves are claiming the incident was caused by an accidental mixing of Ambien and fruitcake, and that it will not happen again.