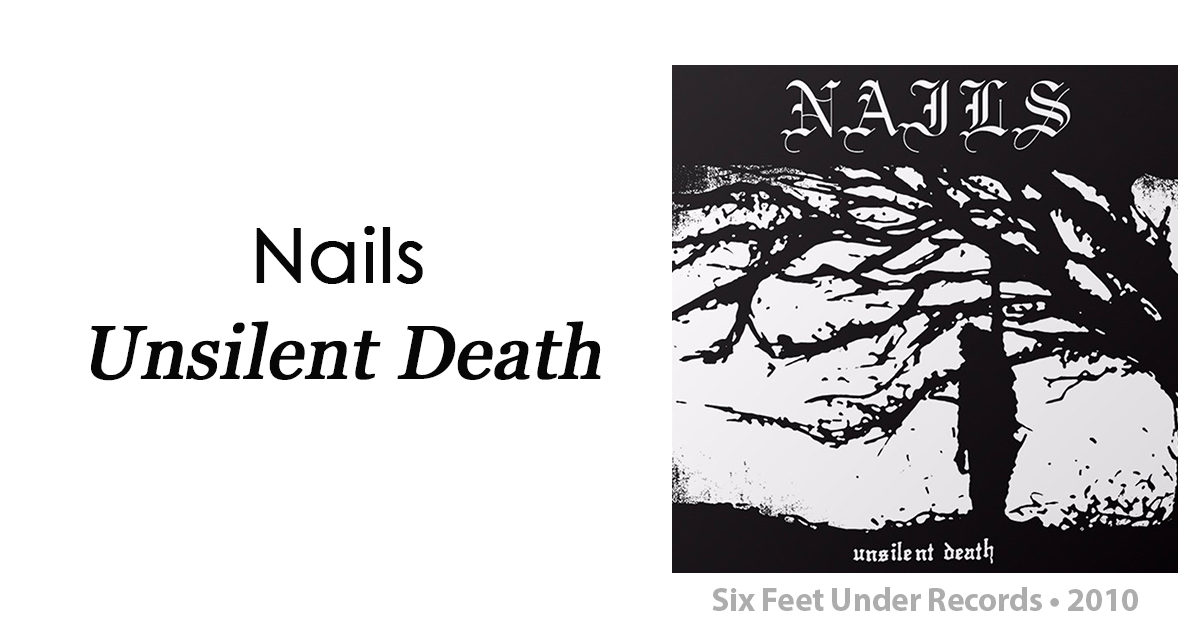 Our commitment to reviewing every album under the sun is unwavering. This week we review the Nails album “Unsilent Death” so you can ignore any other reviews about it that might exist.

Want to give someone a crash course in powerviolence that will leave them feeling bruised, bleeding, and eager for more? Just show them “Unsilent Death” and check in 14 minutes later. Every second of Nails’ ferocious debut feels designed to get under your skin and fester into the most horrific infection, one that would reject even the strongest of antibiotics. More than a decade since its release, it still thrills and frightens in equal measure.

It also makes me wonder why Kurt Ballou hasn’t responded to our request for him to engineer our album.

Ballou is a pretty major factor in why “Unsilent Death” is so good. And it’s no surprise. Whether with his legendary mathcore band Converge or any number of other artists, Ballou knows how to take the most intense sounds and somehow make them even more so.

I’m not being presumptuous or anything. I get that he’s busy and probably gets, like, 100 demos sent to him a week. But I first messaged him four months ago and followed up last week. Nothing. I even referred to him as “Mr. Ballou” and mentioned The Huguenots. I don’t know what else I could do.

I described our attached demo as being like a mix of Full of Hell and The Locust. There’s no way that turned him off, right? It’s only seven minutes long. So, it’s not like we’re asking for too much.

We’re not just blowing smoke, either. We’ve been paying our dues in the Santa Fe underground scene for a while now. We’re ready for that next level. And frankly, Kurt’s ready for us. Not many other producers could handle our vigor. He could.

And we’re eager to hear his ideas! Nails probably came out of GodCity Studio a much better band than when they came in. Kurt Ballou albums just have a level of quality control that can’t be faked.

Ah, well. Maybe he’ll eventually come around and reply enthusiastically about producing the next Scrotum Scab album. If not, his loss.

Score: 5 out of 5 thundering blast beats and guitars that sound like chainsaws in a trash compactor.