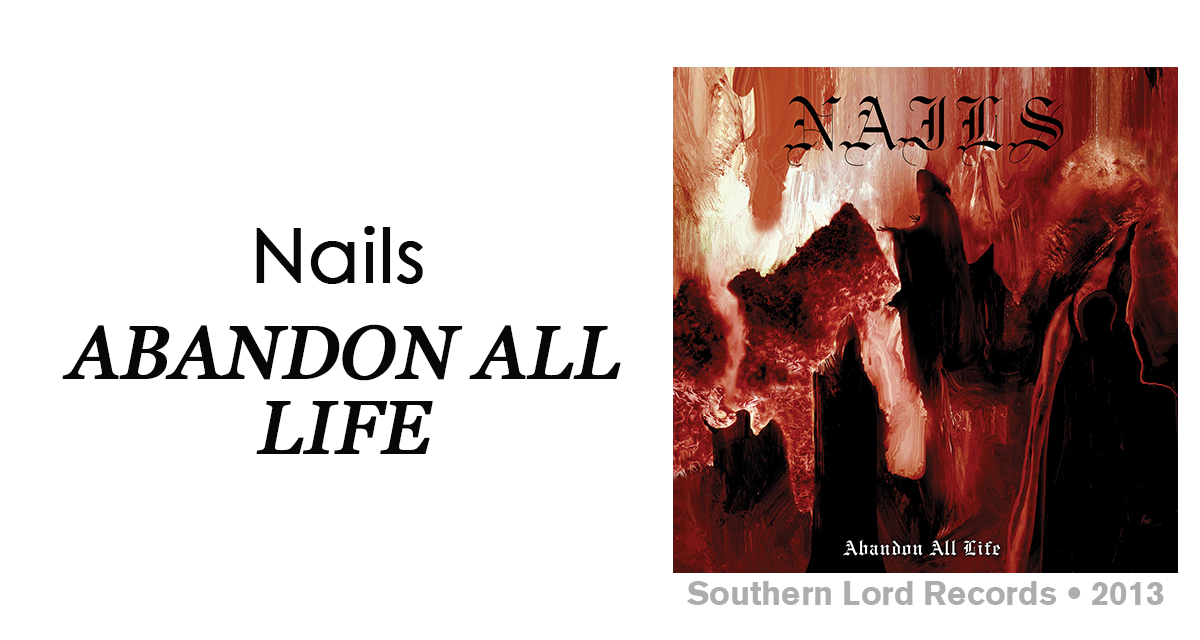 The Hard Times is committed to reviewing every album that has ever existed, but we refuse to go in any logical order. This week, we revisit Oxnard-based powerviolence/grind legends Nails’ 2013 album, “Abandon All Life.”

Your favorite music ends up becoming the soundtrack of your life. That is, as long as you don’t have a bunch of loser naysayers demanding you turn it off.

I love Nails. Their frantic, unhinged music calms me down. So imagine my surprise when my now wife said that the first dance at our wedding couldn’t be “Absolute Control.” Apparently the title “sends the wrong message” and the song “will scare all of the children in attendance” and “make my parents want to kill themselves.” I’m waiting to hear the downsides. Uggh. Fine, whatever.

But relationships are supposed to be about compromise, right? So when the nurse recommended that we make a playlist of soothing music for when Tabitha goes into labor, my mind instantly thought of “Wide Open Wound.” Thematically, you couldn’t get more appropriate for the situation. But no, I had to watch my offspring enter the world to the brutal, disgusting tones of Jason Mraz. Truly horrific shit.

The last straw was when I lost my job. We had two kids and money was tight. Tabitha was at her wit’s end. I attempted a romantic gesture by learning how to play “Suum Cuique” on guitar. It’s their softest song by far- practically singer-songwriter fare. She did not take kindly to this. I mean, I perfectly imitated Todd Jones’ vocals. What more could she want?

We eventually got back on our feet. Upon filling out our wills together, I lied to Tabitha and said I left my phone in the attorney’s office. I ran back in, and added a clause stating that at my funeral, “God’s Cold Hands” will play through a 600w sound system as my coffin is lowered into the ground.

No one can take this last joy from me as I, ahem, abandon all life.

SCORE: 10/10 arguments with your spouse.