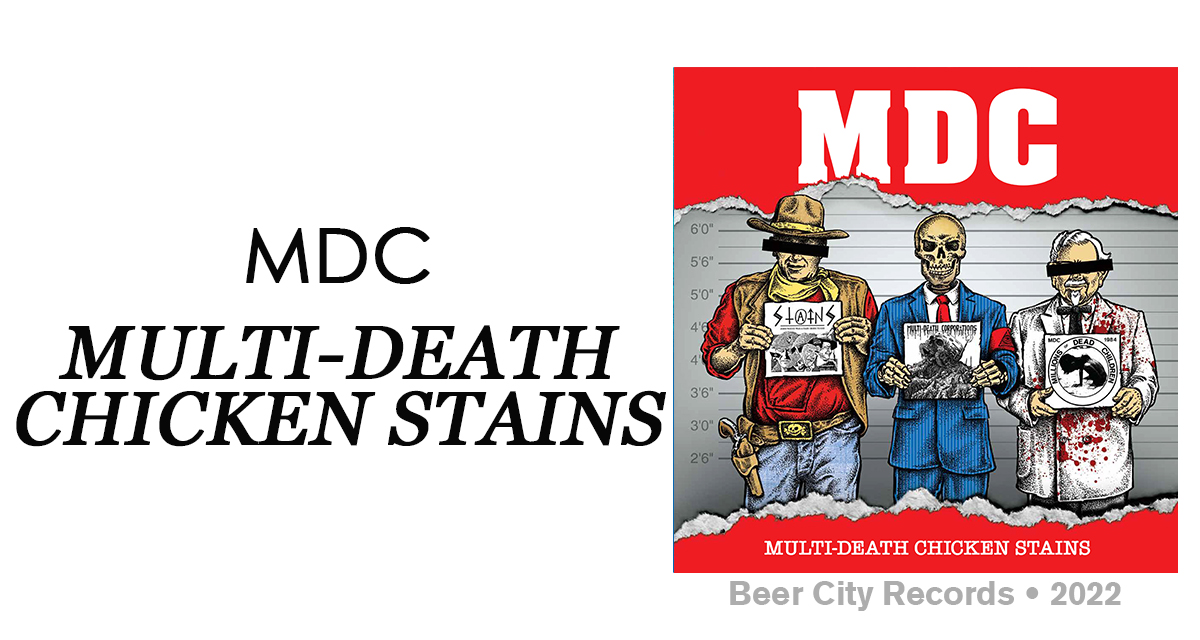 Each Sunday, The Hard Times travels back and reviews a notable album from the past. This week we’re taking a look at Austin hardcore band MDC’s album “Multi Death Chicken Stains” for which Beer City Records has released a new Millennium Edition.

MDC has gone through a variety of stage monikers throughout their career. Look no further than Millions of Dead Cops, Multi-Death Corporation, and Maximum Drew Carey. Who knows what MDC stands for on their “Multi Death Chicken Stains” record? All I know is that (1) this album slaps hard and (2) MDC changes their name as much as Puff Daddy.

It’s true. One day he’s P. Diddy. The next he’s just Diddy. Then all of the sudden he drops another bomb on us and changes his name to Sean Combs. Seriously, pick a lane and stay in it, Puff.

Anyway, I’m still kind of pissed at that guy for not picking me to be a participant on his reality show “Making His Band,” which was the spinoff of “Making the Band,” the widely popular yet probably forgotten about until I just mentioned it now program on MTV. But I for one haven’t forgotten.

The year was 2009. I had auditioned to be the bass player on “Making His Band.” My qualifications were through the roof. I was in a band in high school. I read almost all of Puff Daddy’s Wikipedia page and downloaded a bunch of his songs from Limewire. And most importantly, I had very strong thoughts and an in-depth plan on the direction Diddy’s band should go. Think: Joy Division meets Bone Thugs-N-Harmony, but with ska elements and surfer vibes too, yet brutal like Slayer, also offbeat like Radiohead, but worldwide fame like Nirvana. Why has no one thought to do this before, right?

Ok, so maybe I shouldn’t have broken into Puff’s house that one time to get him this message and do my audition for him first thing in the morning. Really thought he’d like my ambition and go-getter attitude. Also, he never responded to any of my previous emails or letters. What else was I supposed to do to get on his show?

Long story, short. I did not get to be on that show and the restraining order was a pretty clear indication that I never would.

In conclusion, this MDC record is an absolute winner.