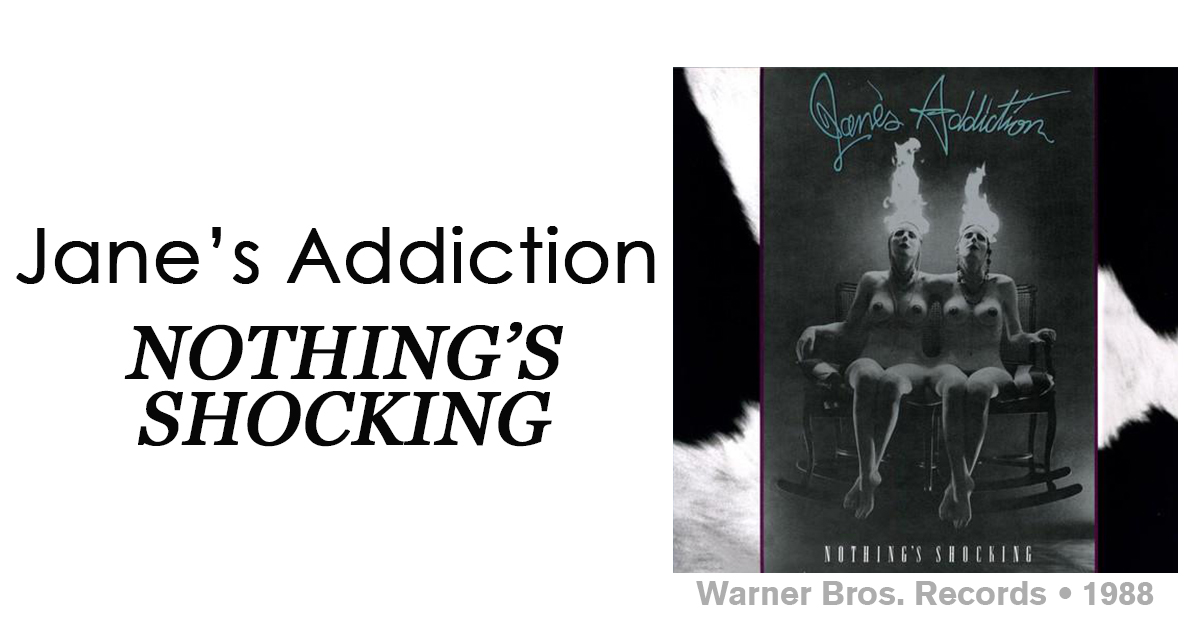 Each Sunday, The Hard Times takes a trip to the past to review a classic album. This week we take a look at the debut album from Jane’s Addiction and some of the stories behind the songs on “Nothing’s Shocking.”

In 1988, I was too busy playing with He-Man figures and getting beaten up by my older brother to realize that “Nothing’s Shocking,” the debut full-length release by Jane’s Addiction, had just been unleashed into the world like a hungry tiger in a Golden Corral. Eventually, I became a huge Jane’s fan, eagerly learning as much as I could about them—and it turns out that many of their songs have surprising origins.

For instance, not a lot of people know that “Ted, Just Admit It…” isn’t inspired by serial killer Ted Bundy—it’s actually about Ted Knight, star of “Caddyshack” and “The Mary Tyler Moore Show.” As the story goes, a young Perry Farrell used to wait on Knight when he worked at Morton’s in LA, where Knight was notorious for pretending to choke in order to get out of paying for dinner.

“We all knew he was full of shit,” reflected Farrell in a 1997 Spin interview. “Sometimes when they were rolling him out on a gurney, he’d actually wink at me. You gotta admire the balls on that guy. I told a coworker that I was shocked by Knight’s behavior, and that world-weary old prep cook said, ‘That’s showbiz baby.’ That really stuck with me.”

The track “Ocean Size” has an interesting backstory as well: One night, Farrell and shirt-averse guitarist Dave Navarro were going to town on a heap of Taco Bell’s since-discontinued Bell Beefers. “We took our pay from that night’s gig and got like two dozen of those things,” recalled Farrell. “Dave said he loved Beefers so much that he wished he could keep eating them until he was the size of the ocean. He actually might have some weird gaining fetish, come to think of it.”

In my digging, I also learned that a line referring to a “waffle stomp” was thankfully omitted from “Standing in the Shower… Thinking.’” And did you know that the original lyrics for the classic track “Jane Says” were about drummer Stephen Perkins’ infatuation with actress Jane Seymour? Additionally, “Had a Dad” is based on a spec script penned by bassist Eric Avery for the 80s sitcom “Major Dad.”

Turning up all this deep Jane’s lore has only increased my appreciation of the band, and this incredible album in particular.