Review: Every Time I Die “From Parts Unknown” 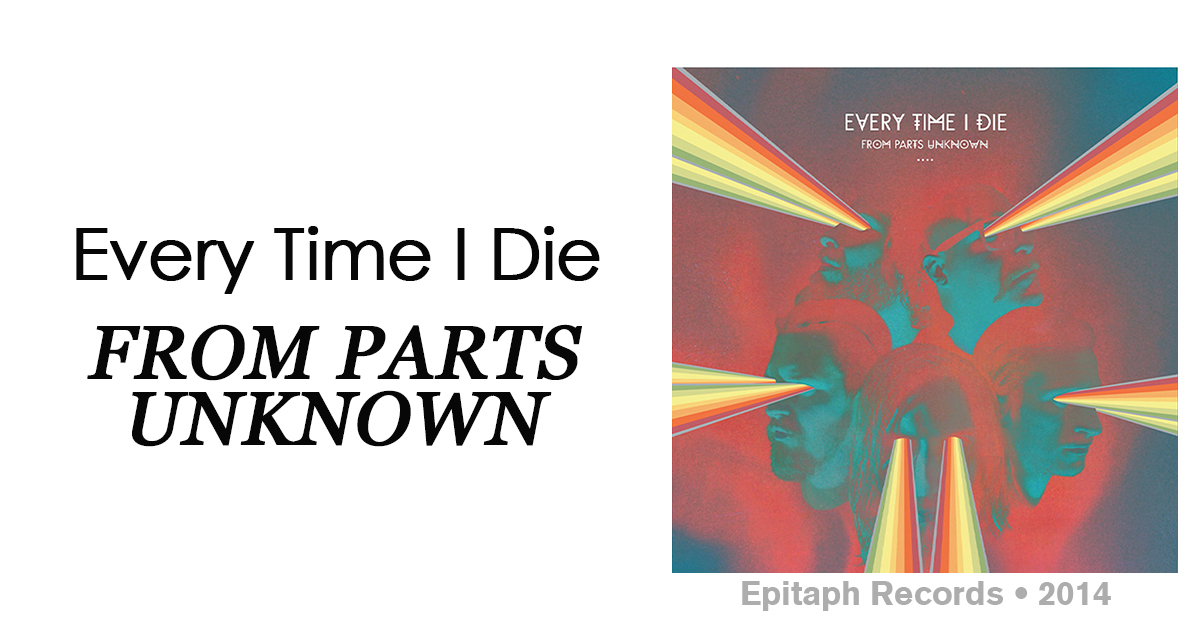 Each week The Hard Times takes a look at an album from the past or from exactly 2014 like in this case. This week we’re zeroing in on what makes Every Time I Die’s album “From Parts Unknown” tick.

Every Time I Die is everything you want in a band. They’re kickass, they’re fun, and their music makes you want to pound a can of Budweiser while wading in six-inch deep water in a kiddie pool and wearing cutoff jean shorts before passing out in a foldable lawn chair in the backyard for the rest of the day in late August. Yeah, they’re that good.

But don’t let the album title fool you. This record has absolutely nothing to do with Anthony Bourdain’s “Parts Unknown” show. I’ve actually watched every single episode of that program but the only one I seem to remember is the one where Tony goes to a town called Medford in Long Island, New York. I never heard of it before but it sounded exotic.

I was locked in the minute Bourdain ordered the spinach and artichoke dip from a quaint eatery called Applebee’s followed by two-for-one priced Coors Lights because it was after 10 o’clock. After that, they went across the street to a hot spot called TGI Fridays to experience some of the region’s local cuisines like the loaded potato skins and extreme tater tot nachos. Man, did they look delicious.

The next morning, Big Tones started the day with an espresso from a small hole-in-the-wall cafe called 7-11 and tasted some of the land’s finest pastries at another local establishment called Dunkin’ Donuts, where he ordered their signature delicacy known simply as Munchkins. Then for lunch, he stopped off at a restaurant known in this region as Subway. Turns out, this town has about six or seven of them. That’s like Paris!

Then for dessert, the “Parts Unknown” team headed over to a place called Dairy Queen, or “DQ” as Anthony kept calling it. I believe his exact words were, “From Queens to Dairy Queen, if you ever find yourself in Medford, you’d be foolish not to dive head first into DQ’s Oreo Mocha Fudge Blizzard.” Just wow. I definitely will, Mr. Bourdain.

And while there isn’t as much crossover between ETID’s album and Anthony Bourdain’s show as you would think, I assure you that both will make you want to travel to unfamiliar parts of this world.

Score: 10 out of 10 boneless buffalo wings