Opinion: You Can Get Pretty Fucked Up Off Non-Alcoholic Mouthwash Too 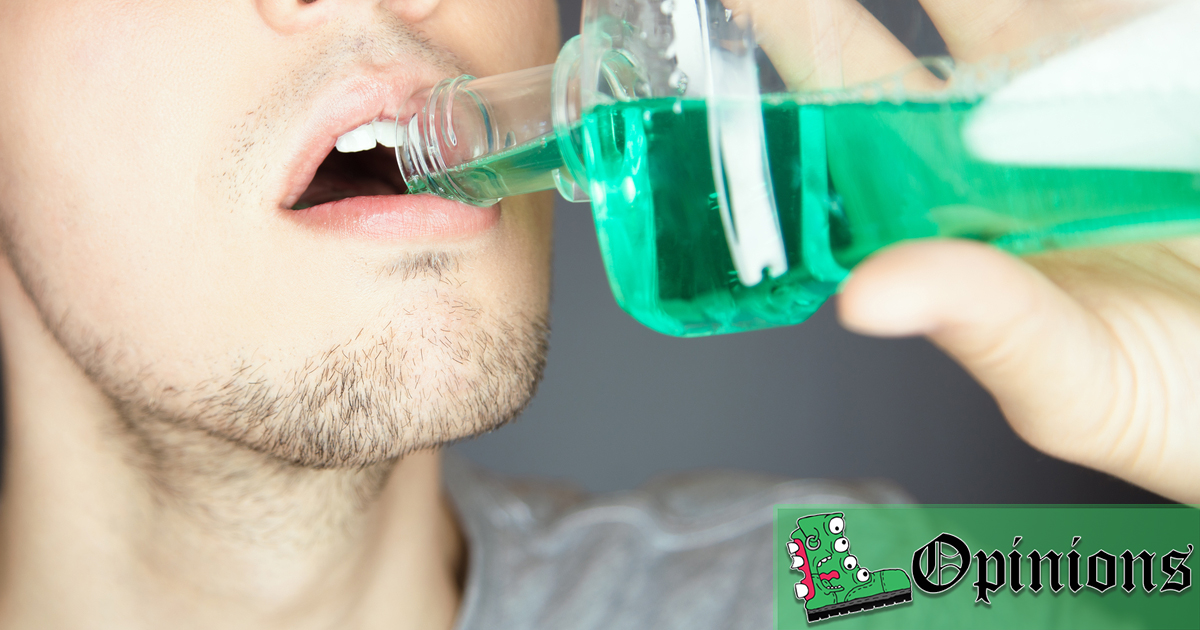 It started out like any other Tuesday. I was day-drinking with my usual tallboys of Bud Light Chelada with Clamato, when I realized that I was running low. The desire to continue chasing the dragon with spicy tomato and sweet clam broth was so strong that I had to venture out for another case. I ran into a problem when the liquor store around the corner was closed for their lunch break. I didn’t want to lose my buzz, so when I got home I had to quickly find a viable solution.

I ran to the medicine cabinet because I knew my girlfriend just bought a bunch of toiletries and went straight for the mouthwash. This is when I came to the most unfortunate realization: there was no alcohol in this mouthwash. Not even a sliver of a percent. But at this point, my buzz was fading, I had clams on my breath, and I knew that desperate measures would call for desperate actions. Without putting much further thought into it, I tilted my head back and started chugging. I immediately felt a surging rush of wintergreen and benzoic acid and thought I made a mistake. But get this… it started working.

It wasn’t the usual buzz I was used to, but man I definitely ended up passing out and pissing my pants. You heard it here first, guys. You can get just as zonked off non-alcoholic mouthwash as you can with the hard stuff.

I think the best part of this realization is that my girlfriend wasn’t even mad at me. I typically get way too drunk way too early and trash the place. But she said when she found me this time I was just kind of twitching in one spot, and the rest of the place was in decent shape. I apparently even got my soiled clothes into the wash during my blackout, which is another total win. Plus, she was complimenting my breath all night! I just wish my stomach could handle sudden movements because I ended up puking all over her mid-make-out sesh.

The moral of the story is that in a pinch any mouthwash will do, but you gotta make sure you’re mixing the right flavors. What I really think needs to happen is that we need to petition Big Mouthwash to make some better mixers. If we got a berry flavor in the mix on some of those new spiked seltzers, the sky should be the limit. It’d at least be better than my spearmint and clam juice beta test.