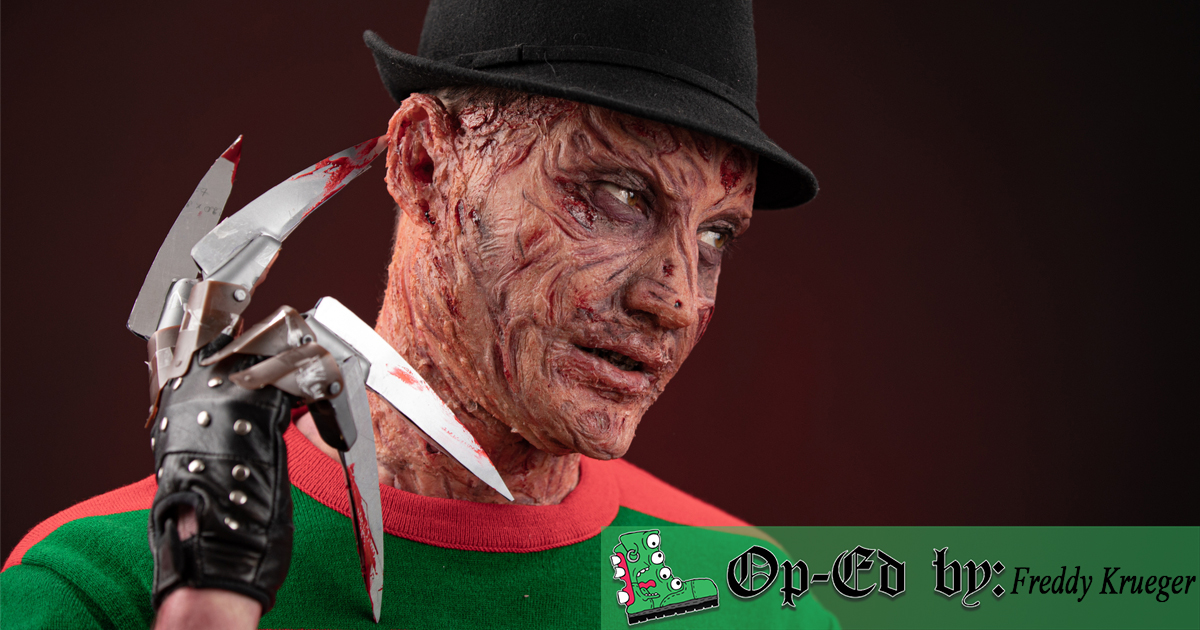 Hey kids, it’s your old pal, Freddy! No, not that molest-y 2010 reboot crap, I’m talking O.G Fred Man. That’s right bitch, Freddy’s back! It’s been a long time since ole Freddy had a chance to rap with you. Or The Fat Boys. Remember that, bitch?

Anyway, a lot has changed since 2003 and I want all of you little fuckers to know that Freddy’s changed too. I’ve been doing some real soul searching, and it’s taken a long time because I’ve collected a lot of souls over the years!

All kidding aside, bitch. I’ve done some real growth. I may be a dream demon but about a year ago I had a real wake-up call, bitch. I snuck into a kid’s dream to murder him and caught him wearing a dress. I’m ashamed to admit this, bitch, but I laughed at the little fucker.

I didn’t know any better. Hell, I grew up in the ‘50s! But you know what this little fuckers dream-power was? Bravery. After I cracked wise he said to me in a strong, matter-of-fact voice, “This is how I feel on the inside and I’m not ashamed of it.”

If my face wasn’t already red with the blood of many, many children it would have turned red from embarrassment. Freddy is a lot of bad things but a bigot isn’t one of them, bitch. I apologized. I made a commitment to change and be more open-minded in the future, and even asked their preferred pronoun. I am proud to say that I killed them by blending them inside a water bed.

Look, I’m not saying I’m Mr. Perfect. And there’s certainly no need to get into which dream demon referred to a black teenager as “dark meat” in “Freddy vs. Jason.” All I’m saying is, I’m listening, bitch. I’m recognizing my flaws and I’m trying to be better, cock-sucker.

Face it bitch, when it comes to progress in slasher villains, Freddy’s always been ahead of the curve! You won’t get this sort of forward-thinking from other serial killers on my level, bitch. Voorhees is Trump country all the way and Michael Myers is a staunch libertarian. I can’t believe Dr. Loomis spent 15 years trying to get that asshole to talk. All you have to do is mention the capital gains tax and the mother fucker won’t shut up for 4 hours!

From now on I begin all murder dreams by asking the bitch their preferred pronouns. Then I say “trigger warning” and I point a gun in their face, but then when I pull the trigger a red and green flag pops out with “BANG!” written on it, so that’s fine. Then we do a few improv exercises just to loosen things up and then I kill them, but in a responsible and progressive way.

Last week I turned into, like, a Freddy version of Bernie Sanders. I tossed a kid into the furnace and told them to “FEEL THE BURN!”