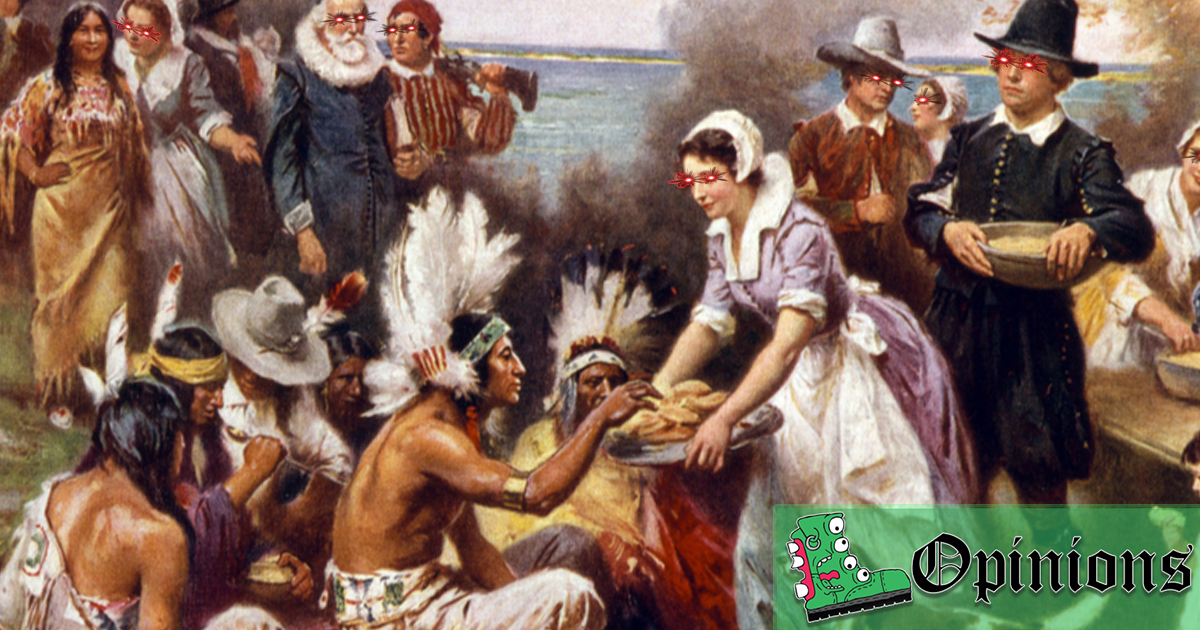 Halloween is fucking poser shit and it’s about time somebody said it. We go around acting like it’s the scariest day of the year when in all honesty the origin story behind it is just about as scary as Machine Gun Kelly’s music is punk. It’s not. At all. Not even a little bit. Historically speaking, Thanksgiving has a darker and much more sinister past than all of “spooktober” combined.

Halloween originated with the ancient Celtic festival ‘Samhain’, where people would light bonfires and wear costumes to ward off ghosts. I mean sure, ghosts and costumes are good spooky fun but you know what’s truly scary? Genocide.

We’re taught this story of Thanksgiving about how the Native Americans and the Pilgrims got along in perfect harmony over a nice dinner, a complete bullshit narrative more contrived than the plot of Halloween 6: The Curse of Michael Myers.

Nobody ever talks about the fact that thousands of English colonists settling in Plymouth brought enough disease with them to wipe out 90% of the Indigenous peoples of New England by the early 1600’s. Think about that. That’s almost everybody, without even trying! And then, after that, they started trying!

Being wiped out by something you can’t even see is way scarier than Jason and Freddy any day. It’s a horrendously terrifying part of this country’s history and we, traditionally, downplay all of that with Turkey, Cornucopia and Pumpkin Pie like everything is hunky-dory.

Halloween can’t compete with an atrocity like that. I promise you, if Halloween was rebranded as the day when the son of a Wampanoag Chief was dismembered by English Colonizers who later impaled his decapitated head on a spike that was left on public display for 25 years, it’d make the day much more sinister.

Fact of the matter is, that’s a brutal historical fact tied to Thanksgiving, a day that deserves to finally be recognized for what it is. One of the scariest and most heinous days of remembrance in the history of these United States.