Opinion: “Everything Everywhere All At Once” Is Just Part Of The Liberal Agenda To Make Us Ask Ourselves The Big Questions, Feel Things We Haven’t Felt In Years, And Cry In Public 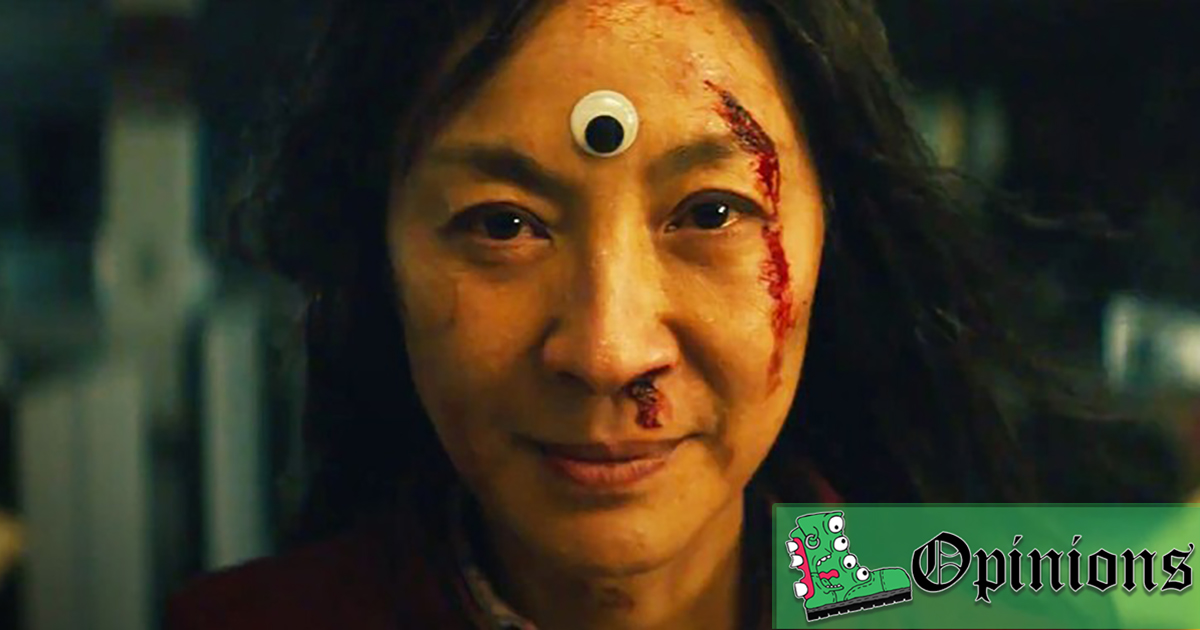 Well, the Hollywood liberal propaganda machine is back folks, and in full force, this time in the guise of a sci-fi flick called “Everything Everywhere All At Once.”

When I heard there was a new multiverse movie I couldn’t wait to go through the motions of seeing my favorite pre-established geekdom characters team up to do laser karate and such. What I got instead was some diversity casting art film that moved me in ways I hadn’t felt since I was a naive teenager. Pure manipulation and exploitation!

All I wanted to do was munch on popcorn and be mindlessly entertained. Instead, I’m wondering if I gave up on my dreams too quickly, weeping tears of joy, and contemplating a reconciliation with the lesbian daughter I disowned 10 years ago. Thanks a lot, Obama!

This is the future liberals want! A future where we just up and decide to forgive ourselves and one another, to end the cycle of abuse we’ve been cogs in our entire lives, and move through the world with love and compassion for ourselves and the people who touch our lives. No thank you, George Soros!

I do not go to the cinema to be filled with ideas, challenged, or have my emotions engaged. I go to the cinema to make sure that the latest Marvel movie is beat for beat exactly what the internet said it was going to be 2 years in advance. Either it is, and I applaud, or there is the slightest deviation of my expectations and I violently complain about women on the internet. THAT’S cinema, not some thought-provoking visually stunning contemplative art piece with genuine humor and heart that has you leaving the theater with a renewed sense of wonder.

The only thing close to an emotional or thought-provoking response I’ll accept from a film is a slight giddiness and sense of admiration for corporate synergy when two different Spidermans talk to each other. Anything that goes deeper than that is pure deep state propaganda.

It was my weekend with my son when I saw that movie. How am I supposed to explain to an 11-year-old boy that his father was crying, not because of gambling losses or Trump being cheated out of office, but because he was moved by a piece of art? That’s nothing a future Marine should know his parent is capable of.