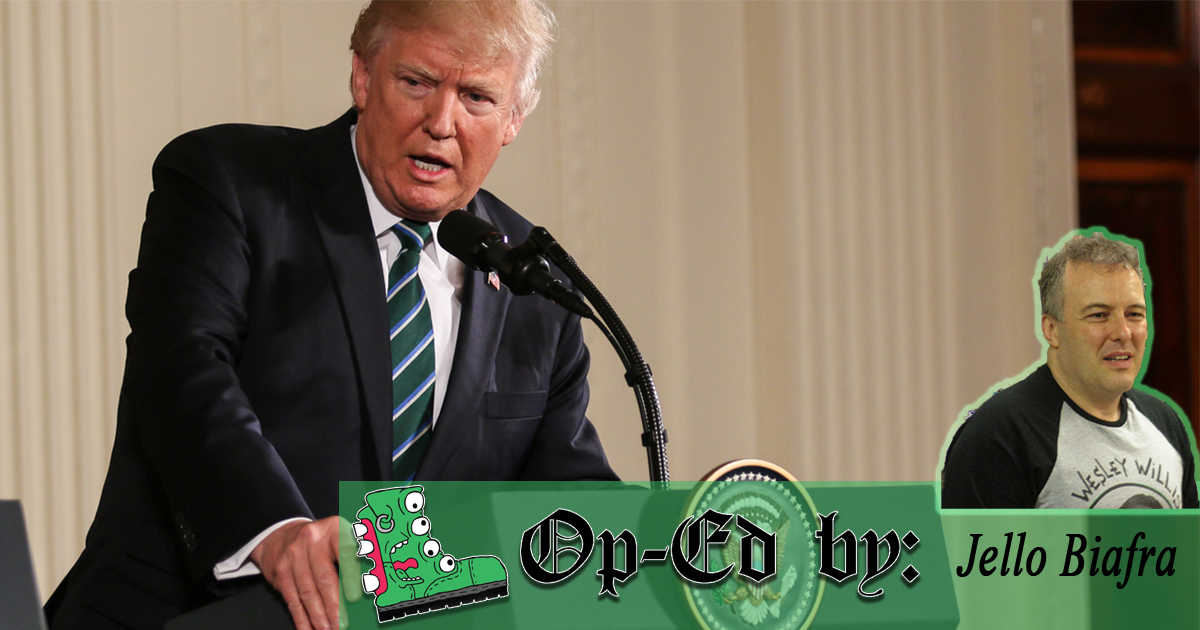 Punk songs aren’t supposed to live long enough to have a mid-life crisis. But here we are in 2018 and the Dead Kennedys songs I wrote (Yes, I wrote them. I don’t care what some lawsuit says) during the Carter administration are now out there buying Volvos, taking the kids to soccer practice, making sensible financial investments, and sipping red wine while silently nodding along in agreement with Chris Matthews.

These songs should have died a long time ago. Do you know how depressing it is for them to still be relevant right now? Every song. Even Viva Las Vegas.

I can’t be the only one who’s tired of songs about some b-rate nitwit celebrity with fascist intentions who conned their way into the presidency and has their finger on the button.

Who’s next? Oprah? I was on her show- twice! I should never have been interviewed by someone who could quite possibly become president!

Eventually, I’d like to write some songs about me- about who Jello is. But noooo, I have to still keep screaming about the religious right because you punks didn’t listen to me forty years ago or whatever. Now your grand kids are coming up to me and telling me how grandpa met grandma at CBGB’s, voted for Mondale and Dukakis, and promised them the Fresh Fruit for Rotting Vegetables first-pressing vinyl in their will.

Do you know how much money I have to leave on the table now, by the way? My phone is ringing non-stop with offers to sing the old songs. Fifty state tours. Headlining secondary stages at European festivals. Stephen Colbert asked me to come on The Late Show to sing Terminal Preppie. Their producer, who assured me he was a big fan, told me I could even wear a shirt with Kavanaugh on it.

For Christ’s sake, Jerry Brown is still the governor of California! We still have to tell Nazi’s to fuck off! This is a nightmare!