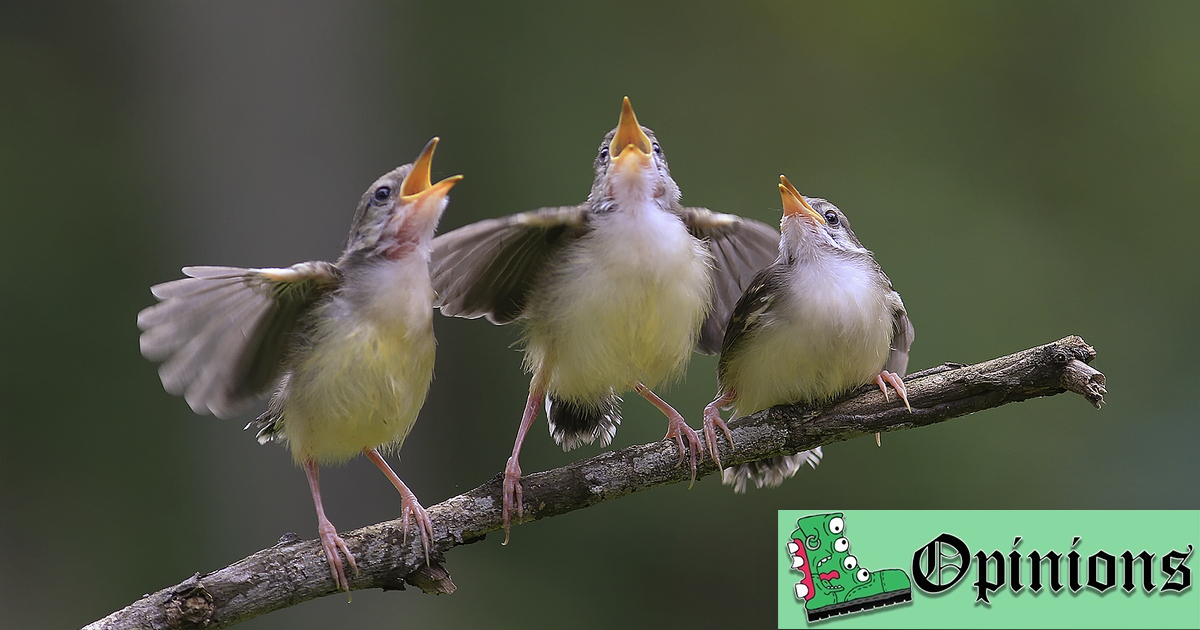 Every morning, I wake up and lay in bed, thinking about how my day is going to go while listening to the birds sing their morning songs. And while they may be gifted melodically, honestly, birds don’t know a goddamn thing about how to structure a song.

I don’t know why everyone acts like birdsong is so beautiful or amazing. Beethoven and Handel both used birds as motifs in their compositions and let me tell you, they needn’t have fucking bothered. Birdsong is bullshit and I’m gonna tell you why.

First of all, it’s a mess. Any neophyte songwriter could tell you that a good song needs construction. It can’t just be a wandering, half-assed series of notes that goes nowhere and repeats itself every other bar. Ya know who writes a song like that? A stoned freshman who just got handed an acoustic guitar at a party. And fucking birds. At best it’s just fast, high-register scales. Birds are the American Idol singers of nature.

Hey birds, ever heard of verse-chorus structure? It’s only been around since, oh I don’t know, the days when “Oh! Susanna” was topping the charts. It’s the single most basic form of song structure in the world and it doesn’t seem like you know a thing about it. Maybe next Winter you should migrate to a community college with a mid-level music program. And don’t get me started on birds not even seeming to know what a middle-eight is.

Umm, hey birds, maybe try sitting down and studying some of the greats. Instead of perching aimlessly in your trees and tweeting out whatever comes to mind, buy some Beach Boys records. What Brian Wilson has forgotten about song composition (and believe me, it’s a lot), you couldn’t learn in a lifetime. Maybe fly into your local record store, pick up a copy of ABBA’s 1976 tour de force, “Arrival,” and listen. Like, really fucking listen. That’s what a hook is. Not your stupid peeps.

Oh, and also, birds have no idea how to actually perform with each other. Every single bird out there seems to be singing the exact same repetitive, looping musical phrase at the same time. I won’t dignify it by calling it a melody. They’re constantly jumping over each other just to do the same “tweet tweet tweet” like every other bird. Birds are selfish jazz musicians trying to play the same solo over each other all the time. They’re on par with the worst jam band ever. Or, like, decent jazz.

Listen, birds. Try harder. I’ve put up with your bullshit experimentation, but if you don’t buckle down and learn some structure, you’re going to lose a fan.