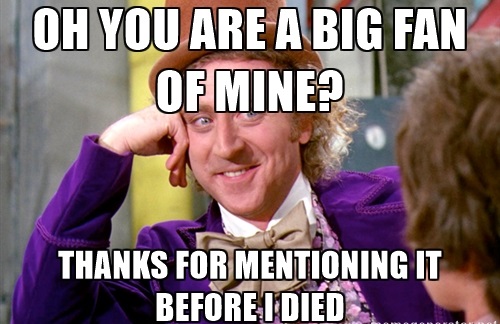 LOS ANGELES – Gene Wilder, 83, most known for his role as an Internet meme, was confirmed dead in a Snap from his lawyer early on Aug. 29, The Millennial Herald reports.

Fans of the meme showed an outpouring of grief across all forms of social media.

“I will be honest, I was surprised to hear the Wonka guy was still alive, but I was a huge fan of his ability to make me funny through memes,” said Lenny Choi, a longtime user of the meme. “I had just made one about Colin Kaepernick saying, ‘Oh you think you are a hero for sitting down during the National Anthem? Tell me about that.’ It was super funny and my friend on Reddit loved it.”

The Wonka meme has been used to express condescension in a quick snapshot for years and has exposed the actor to a world of fans. Unfortunately, Wilder never really found success outside of the Wonka meme.

“He was a bit of a one trick pony if you ask me. Let’s be honest, in 2016 having only one meme is sort of pathetic. Kanye has over 5 million memes, he is much more versatile,” said self-proclaimed meme expert Gilbert Jordan.

Although Wilder is gone, the legacy of the Wonka meme is poised to live on as long as the internet continues to exist and foster resentment between message board users.

Longtime meme maker Susan Reitz said of the Wonka meme, “It takes real talent to succinctly sum up a complex and nuanced subject like racism or economic inequality in the few characters that can fit on a degraded image on the Internet, but by God these assholes were able to do it.”

Wilder is survived by several thousand revisions of the original meme and uncles across the nation that are shocked that you have never seen Blazing Saddles.