“Re-Entry Is Not a Right,” Says Trump About VFW Show 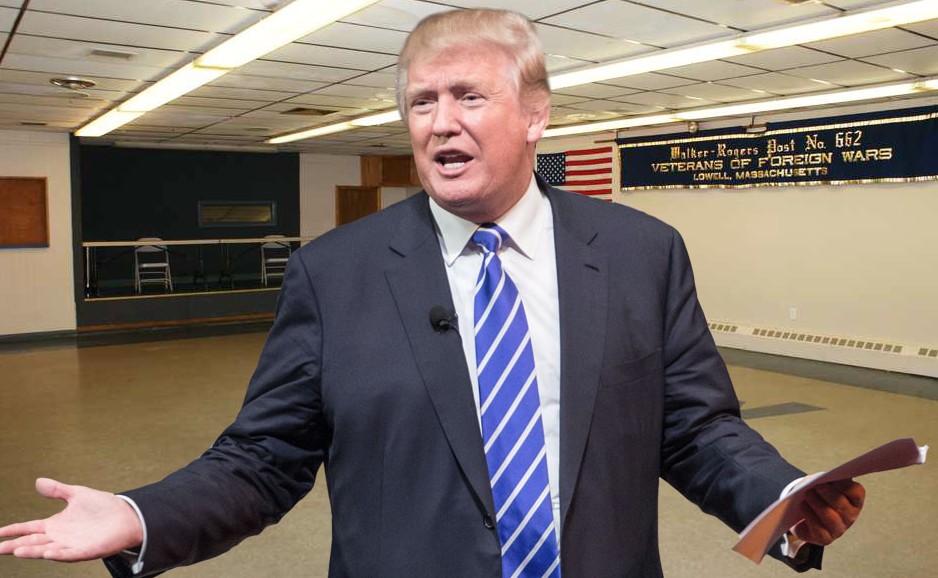 LOWELL, Mass. – “Listen, these losers want to go outside, they want to smoke their mechanical cigarettes, and then they want to come back into the show without paying again? I don’t think so. I don’t think so,” said Trump in the doorway of a local VFW hall. “What if someone out there tried recreating the hand stamp with a Sharpie? We have no idea who these people are and until we figure out the problem, we can’t let these people back inside. We have no choice — we have to do it.”

Many show attendees were left out in the cold after Trump called for “total and complete shutdown” of anyone looking to re-enter the show, even though the venue has a rich history of freedom of movement.

“I just wanted to run to my car, which is right there — like 50 feet from the door — to drop off some merch and my jacket before the headliner,” said show attendee Marcus Kelly. “I got back to the door and Trump is there, arms crossed, demanding another five dollars to get back in. This guy is a fascist.”

As more people were denied re-entry and controversy grew, Trump only took a stronger stance, escalating his no “ins-and-outs” policy to “closed door” status, and barricading the door with a stack of chairs while referring to a reverse-guest list he called “the database.”

“American hardcore kids, we lose to everybody. No, we do — it’s so stupid. There are good bands in here, hard-working American bands and I won’t let them lose to the 7-11 across the street. If someone needs a drink they can buy it at an inflated price from the venue and contribute,” said Trump. “It’s time we make American hardcore win again.”

Not all criticism of Trump’s no re-entry policy has been negative. A quick survey of people inside the venue showed a bump in Trump’s doorman approval ratings, with many show-goers expressing relief that he would not be allowing non-vetted people into the show.

“Hardcore shows are dangerous. You can’t just let anyone go in and out all willy-nilly,” said Ryan “Big Knuck” Carter during a break from running full speed and somersaulting into the knees of people around the pit.

“Who knows what some of those people are capable of?” asked Carter, moments before flipping over the merch table and starting a secondary mosh pit by a stack of chairs.