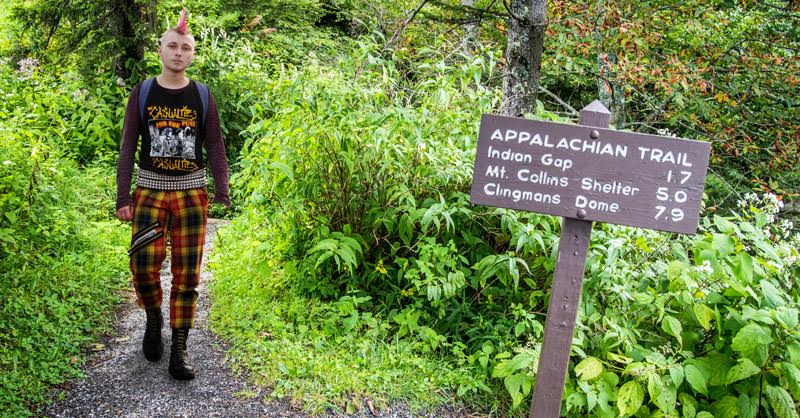 ST. LOUIS — Local punk and all-around malcontent Shaun Malone completed his hike of the 2,200-mile long Appalachian Trail earlier this week, insulting the revered path the entire length of the way from Georgia to Maine.

Malone, who quit his job in April, spent over half a year denoting the defects and dullness of the bucolic route in his blog, The Appalachian Fail. “Oh, look. Another fucking tree,” began a post dated May 25. “This one is a maple. Oh lucky day. Haven’t seen one of these in, like, five seconds. LOL!”

The 30-year-old freelance bartender with a severe case of wanderlust used his savant-esque ability to pinpoint flaws and shortcomings. “Sure, I could’ve trolled some conservation websites,” Malone said, “but I felt I was at a point in my life where I should insult generic-ass nature firsthand… before I settled down.”

Malone’s epic assault began by making fun of Springer Mountain in Fannin County, Georgia, the southern take-off point for the trail. “I called it in Schwing-Her Mountain in Famine County,” he said. “Not my best work, admittedly, but I knew my pun strength and posting stamina would increase as the days went on. It’s a marathon, not a sprint.”

The few who saw Malone on his quest say he spent his nights around a campfire rolling his eyes at the spectacular star display in the night sky, and took almost two weeks making homosexual references about Saddleback Mountain. “That was the easiest part of the whole journey,” he admitted. “It basically writes itself. I really found my stride there.”

Amber Hinckley, a former classmate of Malone’s and amateur outdoor enthusiast, followed Malone’s experience via Facebook with disgust and awe. “He would take photos of himself stepping on spruce-fir moss spiders. That’s not funny — they’re an endangered species. It really pisses me off that he does this while I go work every day,” she said. “Though I’ll admit he made a great meme out of that wild turkey picture.”

Malone regrets nothing. “I’m about 30 pounds lighter from malnourishment and exhaustion,” he said. “But a man can do a lot of soul-searching when he’s alone in the stupidity of  try-hard nature.”

Malone later announced his future plans to shit-talk his way through Europe.