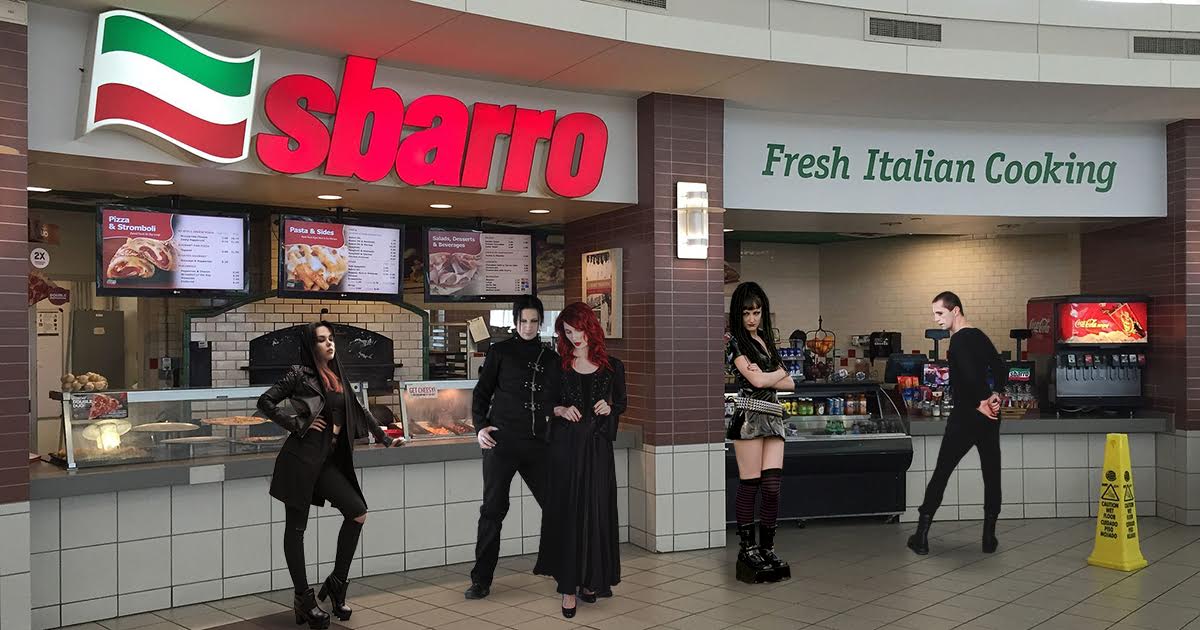 PARIS, Texas — The Goths of the Hot Topic Empire took over a Sbarro restaurant early this morning, continuing their devastating campaign in the War of the Seven Strip Malls, according to reports from the battlefield.

The Goths, emboldened by recent victories at Panda Express and Arby’s, swiftly sacked the Italian eatery at dawn, one of the last vestiges of vital food court territory and beloved eatery of their mortal douche-nemeses: the Jocks of Aeropostale. The capture cemented their vice-like grip on a key stronghold at the Paris Towne Center strip mall, revered for decades as the “number-one cool place to have your parents drop you off at” on weekends.

“This win is okay, I guess,” said 16-year-old Hot Topic Commander Harold Campanelli, wearing his ceremonial My Chemical Romance uniform. “We didn’t even really wanna fight, because war is dumb, but, like, fuck Jocks, you know? This interview is lame,” he said, then rolling his eyes and inserting a pair of earbuds.

The Jocks were reportedly shocked by the surprise defeat and subsequent emasculation.

“Goths are so fucking gay. This shit is retarded,” said Chase Turner, Captain and QB-1 of the Jockian Army. “Why can’t they just do their shitty makeup at home? If they weren’t such pussies, they’d just go and kill themselves, but no — they have to take away our Sbarro. I’m starving. And I’m not fucking eating at gay-ass Hot Dog on a Stick.”

For the past 15 years, the Goths of Hot Topic and the Jocks of Aeropostale have waged a holy war over the seven strip malls — all conveniently located off of I-24, right by the Cracker Barrel. Local historians claim both tribes seek to establish territorial dominance and impassable boundaries between two diametrically opposite worlds: that of the Goths, marked by darkness, emotionally-charged screaming music, and greasy bangs; and the Jocks, stoked on football, getting laid, and bragging about how they never sleep or study for tests.

“Perhaps what is most compelling is their shared interest in ruling the strip mall,” noted local historian David Burgess, a PhD who has made study of the tribal wars his life’s work. “They’re blind to the possibility of unifying over a common goal and living in harmony. I hope one day they see the error in their ways.”

“I mean, they probably will once they graduate high school,” he later added. “None of this matters.”