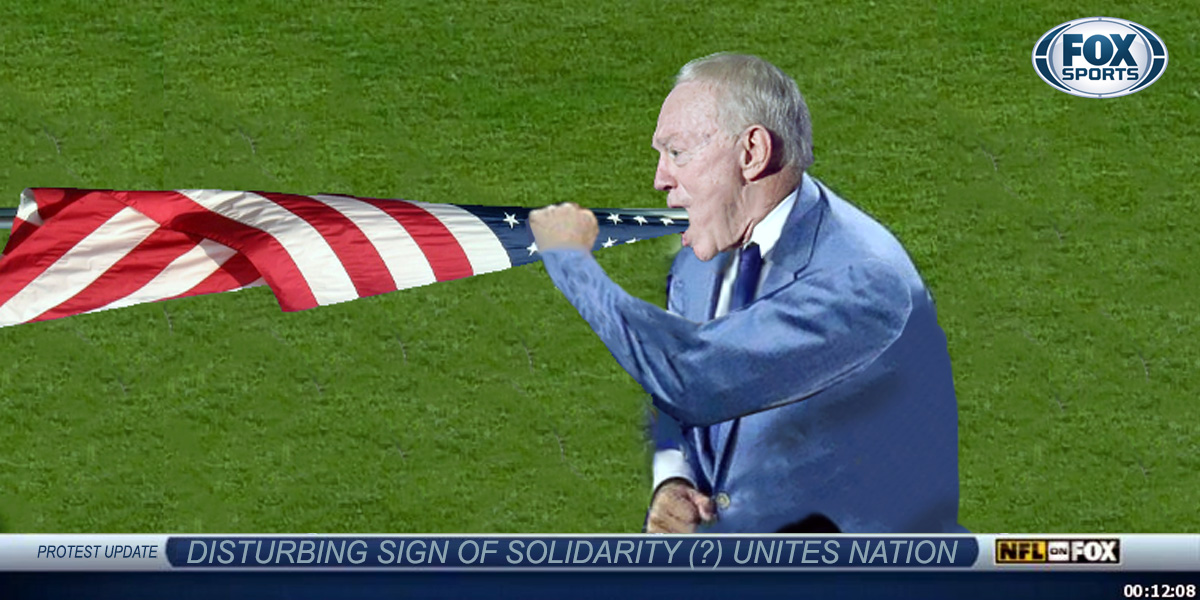 ARLINGTON, Texas – Americans across the entire political spectrum were furious today as Cowboys owner Jerry Jones rolled up the American flag and sucked on it like a dick during the national anthem before the Cowboys played the Los Angeles Rams.

Fans from both teams looked on from the stands in confusion during the act, which many deemed offensive but without a clearly defined political message. “I wasn’t sure how to feel last week when he knelt with the players arm-in-arm as the flag was unfurled,” said lifelong Cowboys fan David Sanchez, “but this week I’m honestly not even sure what he’s getting at. I know it rubs me the wrong way, but I couldn’t tell you why exactly.”

Many notable organizations issued statements offering vague disapproval. “The first amendment guarantees every American the right to protest injustice,” tweeted the ACLU. “With that said, we can’t tell if he’s even picked a side on this one. What’s going on?”

The United States Flag Code, which establishes advisory rules for the care and display of the country’s flag, contains no language condemning the act of rolling it up into a big dick and choking on it, either publicly or in private.

NFL commissioner Roger Goodell, who last week stated he was proud of the league’s response to Donald Trump, spoke out about the day’s events. “Christ, maybe I should have nipped this one in the bud,” he said, dabbing sweat from his forehead. “This whole thing got away from me pretty quickly. Kinda painted myself into a corner here.”

At press time, the incident was trending high on social media with the hashtag “#NOFlagReflex.”