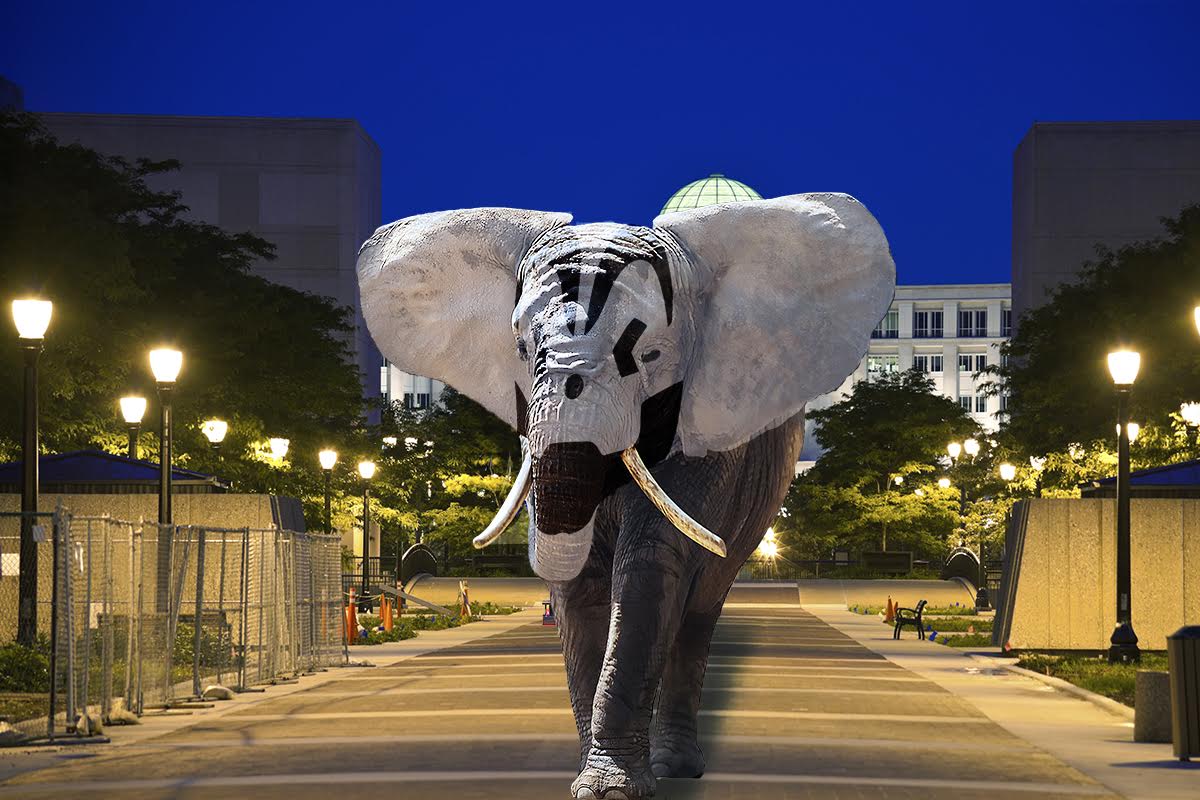 LANSING, MI — BREAKING: A circus elephant has broken free from his cage at the Dark Carnival, a fictional world detailed in a series of Insane Clown Posse albums, and is rampaging across central Michigan.

Terrorized citizens are being ordered to shelter in place as the elephant, who, according to several witnesses and photos distributed on social media, is wearing black and white clown makeup. Authorities say the elephant, known as “Izzy da Trunk Juggalophant,” has been spotted flipping trash cans, smashing cars, wrecking convenience stores, and demolishing a rack of Eminem albums at a local record shop. Multiple victims were hosed down with a liquid sprayed from the painted pachyderm’s snout — a substance biologists claim closely resembles Faygo Red Pop.

Authorities believe the beast came from a wicked circus explored in a series of ICP concept albums: The Dark Carnival. According to Juggalo lore, the Dark Carnival is a traveling carnival where the souls of the dead await their final judgement.

Despite several missing persons reports and thousands of dollars of damage done to public property, local Juggalos have been supportive of the elephant.

“If you down with the clown, you family. That elephant is family. It’s just trying to have a good time and fuck shit up. Nothing wrong there. Get that guy some peanuts already. Whoop whoop,” claimed local fan Michael “Sticky Mike” Parsons. “Whoop whoop,” added another man known only as “Pringles.”

Adding to authorities concern is a Twitter video posted by user “JayDawg69” that shows the elephant — who is trained to manipulate objects — stealing a small ax from a hardware store. Locals familiar with Juggalo behavior believe the spectral creature is going “chicken hunting.”

“My training is in zoology, not physics, so I am unsure how the creature got here from the Dark Carnival. I am sure, however, that it’s bad a 6-ton elephant got ahold of a hatchet,” explained Heather Oberman, head of Ingham County Animal Control. “We’re also worried about its general well-being. We’ve seen the elephant chain-smoking Black and Milds and demolishing dentist offices looking for nitrous oxide. Watching a fully grown elephant do whippits was profoundly terrifying.”

Insane Clown Posse frontmen Violent J and Shaggy 2 Dope have yet to issue a response. Sources close to the band claim the two are currently penning a new single, “The Unveiling II,” which will, among other things, detail their confusion with how elephants work.