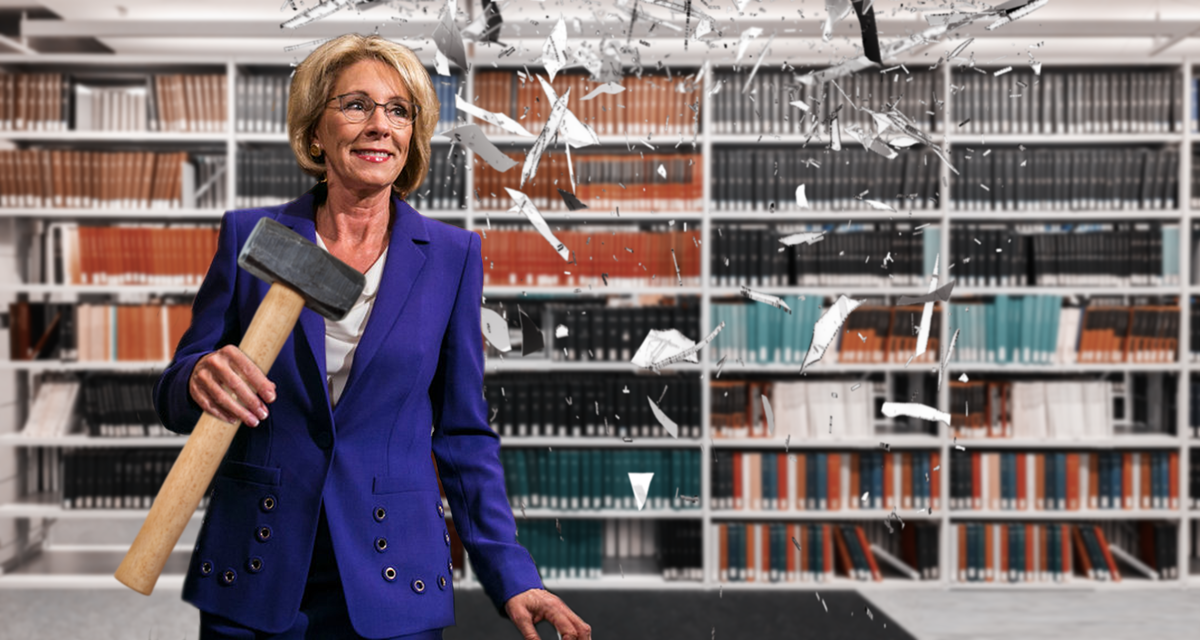 WASHINGTON — U.S. Secretary of Education Betsy DeVos became the first woman to irreparably damage the infrastructure at Woodrow Wilson High School earlier today, shattering the skylights in the school’s library with a sledgehammer, according to maintenance workers currently patching the ceiling with plywood.

“It was so inspiring to see Ms. DeVos go boldly where no other woman has gone before,” said sophomore Maria Gomez. “Right through that glass ceiling. Proving once and for all that rich women can destroy this country’s institutions just as well as rich men.”

The library was the first of many around the country that DeVos plans to personally destroy as part of her initiative to eliminate unnecessary educational costs.

“Our schools are in disrepair, and taxpayers have an unnecessary burden to fix them. Ms. DeVos will knock down each school herself, starting with the libraries,” said White House Press Secretary Sean Spicer. “Libraries have the most books, and therefore are most dangerous. It’s where a child might learn something for free, instead of paying for education like a true American.”

Grace Mooney, the school librarian, had mixed feelings about the agenda.

“Am I empowered by her actions as a woman? Of course. She can really swing that hammer like a champ,” Mooney said. “But as a staff member of the school, I would prefer to not have glass shards rain down on me while I tutor a student on Powerpoint.”

“The fact that she’s taking time to personally address what she sees as accessory is obviously commendable,” Whitby said. “And, she’s right — there’s a lot being spent in our schools that could be cut down. I just don’t think she needs to literally cut down our community garden.”

DeVos is reportedly spending more and more time away from her Washington office, as she sets out to give the same personal attention to every public school in the country. She declined to give an official statement, however, as she was cutting the wiring to the art department’s electricity with her own teeth at press time.

Want to support The Hard Times? Check out our online store: