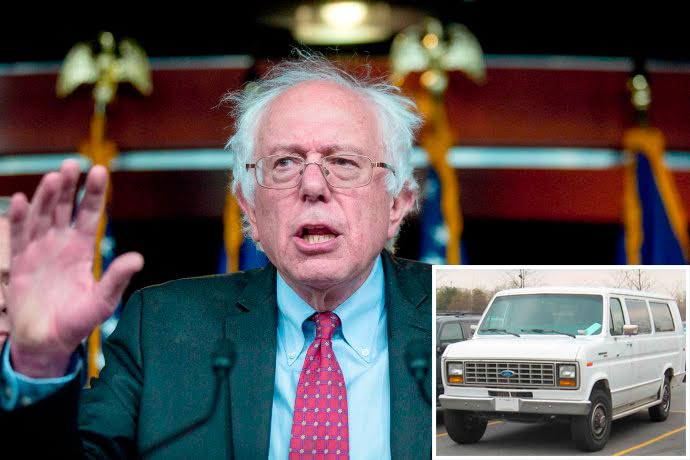 “Let me be clear: it’s not just the van I lost. I also lost my acoustic guitar, laptop, all my merchandise, and a binder that outlines my entire fiscal plan as well as some sick lyrics,” said an emotional Sanders standing on the street corner alternating his gaze in each direction. “But I don’t blame the criminal that did this, poverty is what drives crime and if the government had tried to help the lower class with jobs and education  then I wouldn’t have lost all my damn CDs.”

Sanders said he would be starting a grassroots campaign through popular crowdsourcing site GoFundMe in hopes of recouping the cost of the van and valuables inside.

“Honestly, I feel worse than the day the Supreme Court upheld the Citizens United decision. I’m once again asking you to give money to my GoFundMe page so I can make it to the next debate,” said Sanders becoming visibly frustrated. “We need a revolution of millions of people coming together and donating $5, $10, or $20 to my GoFundMe.”

Sanders is not the first politician to face a major setback on the campaign trail. Dennis Kucinich famously had a delay at the screen printing factory which lead to an entire presidential tour with no merchandise, which many experts believe lost him the election.

“Senator Sanders will certainly recover from this, it is just a small bump in the road,” said political strategist Kerry Mcgough. “But since he had been sleeping in the van while on his campaign tour he suddenly needs a place to crash every night, so until he gets a new van he will be sleeping on the futon in my living room. I know my wife is going to be pissed.”

Sanders advisors remain optimistic that he will return to the campaign trail stronger than ever.

“Mother fucking shit fuck, I just realized my Fugazi tape was in there,” said Sanders.