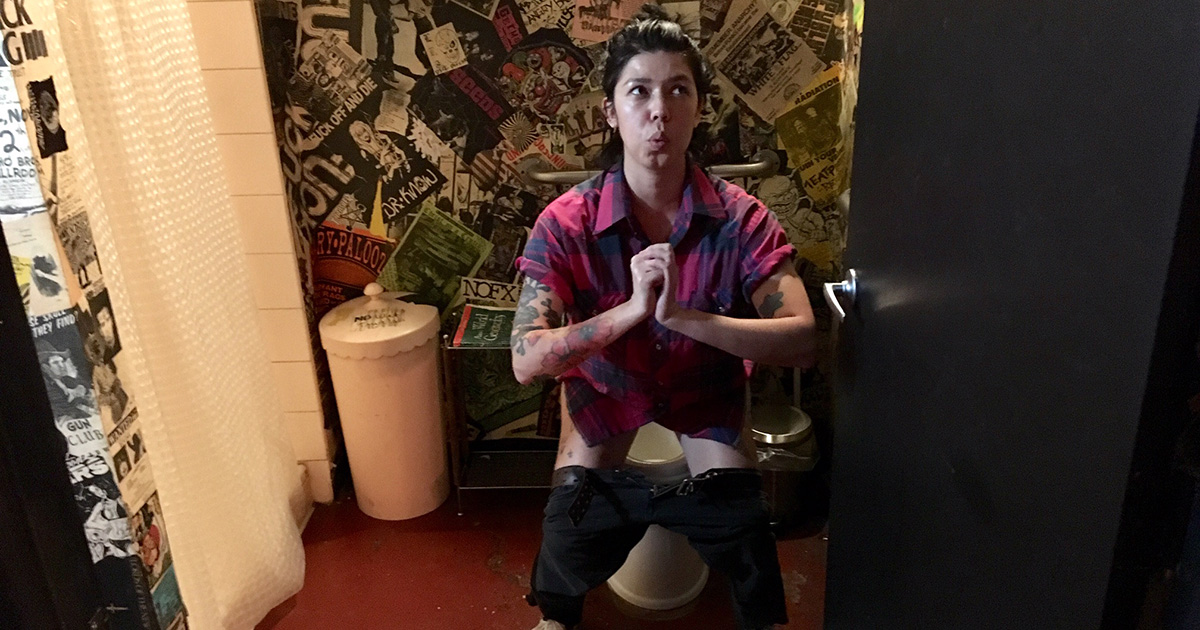 “I’ve heard a lot about high-intensity interval training, and I realized that’s exactly what I’ve been doing over shit and piss-covered toilets for years,” Collins said. “Right now, I’m only able to get to an average of three shows a week, so it’s important to maximize my exertion in the time allotted — which I easily do in the 60 seconds I rush to use the bathroom.”

What started solely as a basic squat hold has evolved into a full-body workout, complete with exercises ranging from lateral leg raises to flush toilet handles with her shoe, to dynamic bicep curls to keep her bag from touching grimy floors.

“Broken locks are my favorite,” she said. “They force me to engage my entire core and arm to reach the door and hold it shut as I squat over the toilet. My heart rate is maximized with the added adrenaline rush that someone might burst in.”

Collins, while proud of her progress thus far, is ramping up her training schedule to use venue bathrooms at a “Crossfit-caliber” level — with help from an unlikely source.

“I thought she was going to complain about the condition of the bathrooms, but then she said she’s focusing too much on her legs and is looking for a more well-rounded workout,” said venue doorman and janitor Lance Griggs. “We got ‘show’ muscles, and we got ‘go’ muscles, and nothing trains hamstrings like standing on your toes to step around a moat of hot puke.”

Determined to help Collins achieve her fitness goals, Griggs has started incrementally removing the bathroom’s conveniences so she doesn’t plateau.

“This thin layer of soap makes it look like some will come out if she pumps it real hard for a while,” Griggs said. “It won’t, though, but you only build muscle when you push until you physically can’t do another rep, so her forearms are gonna make people believe she’s a goddamn drummer before fall is over.”

At press time, Collins asked a friend to spot her in the stall, where Collins had balanced a drink on the toilet paper holder from falling as she attempted to tuck her shirt in inside the two-inch space.