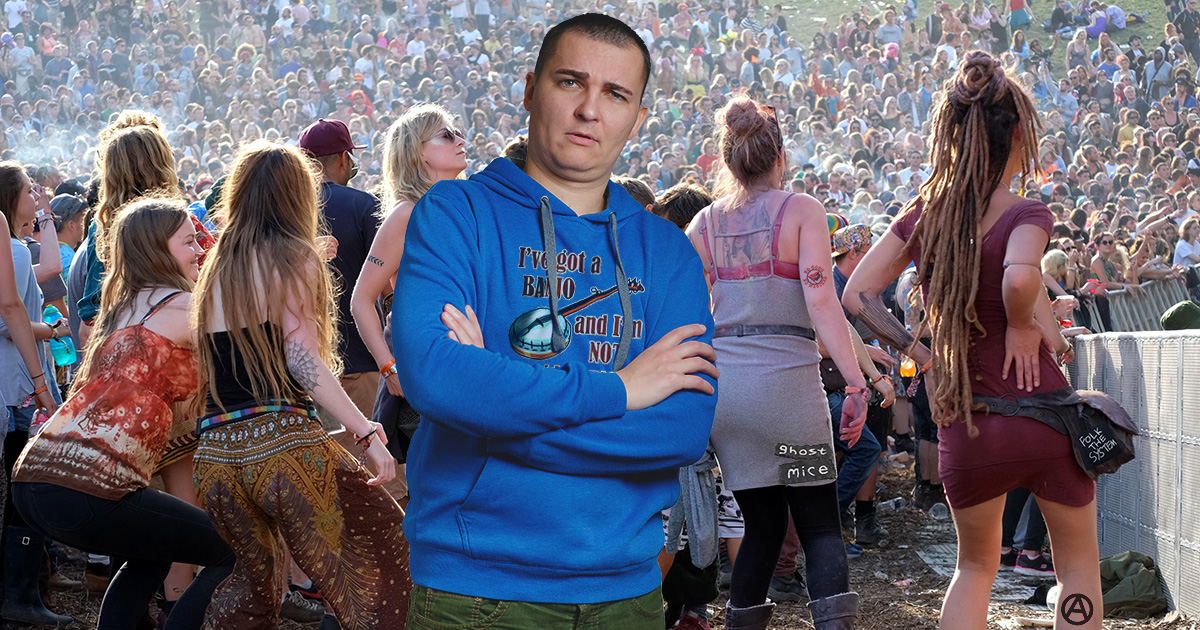 “Christ, what have I gotten myself into?” said Sherman, shortly after arriving at the unsanctioned event in what witnesses described as “clearly an unmarked police car.” “Sometimes I work security at concerts for extra money on the weekends… but this was much, much worse than that. Man alive, barely past noon, the place already stank like the underside of a garbage trout.”

While the 42-year-old sporting a fresh buzz cut was immediately identified as an officer, great care was taken by the attending punks to ensure he did not know his cover was blown.

“They send someone every year ever since we got written up as a potential anarchist training camp,” said Fïghtfärm saw player Dave “Ratbag” Curcio, who travelled to the event via freight train to partake in day drinking, stick n’ poke tattooing, heroin, and also some live music. “We noticed the cops actually have a much worse time if we include them, so I’m going to ask him to fill in on djembe while our drummer is shooting up in the bathroom. The best part is that he can’t say ‘no.’”

Indeed, Sherman was unimpressed by the 34 bands he saw over the course of the 19-hour show.

“I’m a big rock ‘n’ roll fan, and I’ve seen a lot of wild performances in my day,” said Sherman, pointing to his Creedence Clearwater Revival T-shirt. “But never once have I seen someone throw up into a trumpet and have the guy on the other end keep playing like nothing happened.”

Though Sherman observed plenty of unlawful behavior throughout the afternoon, he declined to make any arrests.

“Honestly, I don’t even know where I’d start,” said Sherman. “There’s so much going on here, it’d take me a month to get through all the paperwork. Plus, I don’t think there is enough Febreze in the world that would get the smell out of the back of my car.”