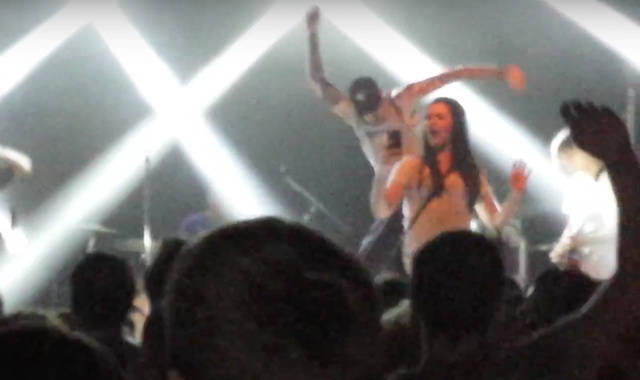 TORONTO – Parker Cannon, lead singer of California pop punk group The Story So Far, has issued a written apology on his personal Facebook page to the “stupid whore” he violently kicked off stage for attempting to take a selfie with the band.

In the statement, Cannon, known for penning insightful lyrics such as “think about who you let between your thighs” and “I know where you’ve been / You’re ruining men,” writes:

“Yo, I want to apologize for overreacting and almost shattering that chick’s spine last night. I shouldn’t have so quickly resorted to violence, but let’s not forget how many hearts that stupid whore has probably broken. Defend pop punk.”

Despite the crude rationalization for his actions, many The Story So Far fans showed their support for Cannon in the comments section of the post. Among those voicing support was the young woman who Parker kicked just days earlier:

“I want to assure everyone that Parker is the sweetest guy and not usually like that, it must have been my fault,” reads the comment. “I accept Parker’s apology, I’ll always love him. Besides, even though it was a little blurry I got over 300 likes on my selfie with Parker’s rage-filled face flying at me in the background. I’m never washing my back again!”

Related:
– Girl Likes Music
– Tall Guy Finds Perfect Woman to Stand in Front of at Show
– We Asked 7 People Who Aren’t Women How To Get More Women Involved in Punk

In an interview over the phone with The Hard Times, Cannon expanded on his view point, “Off the record bro, I’m not gonna let some little attention whore hog my spotlight. And straight up: that was a jump kick, not a drop kick.”