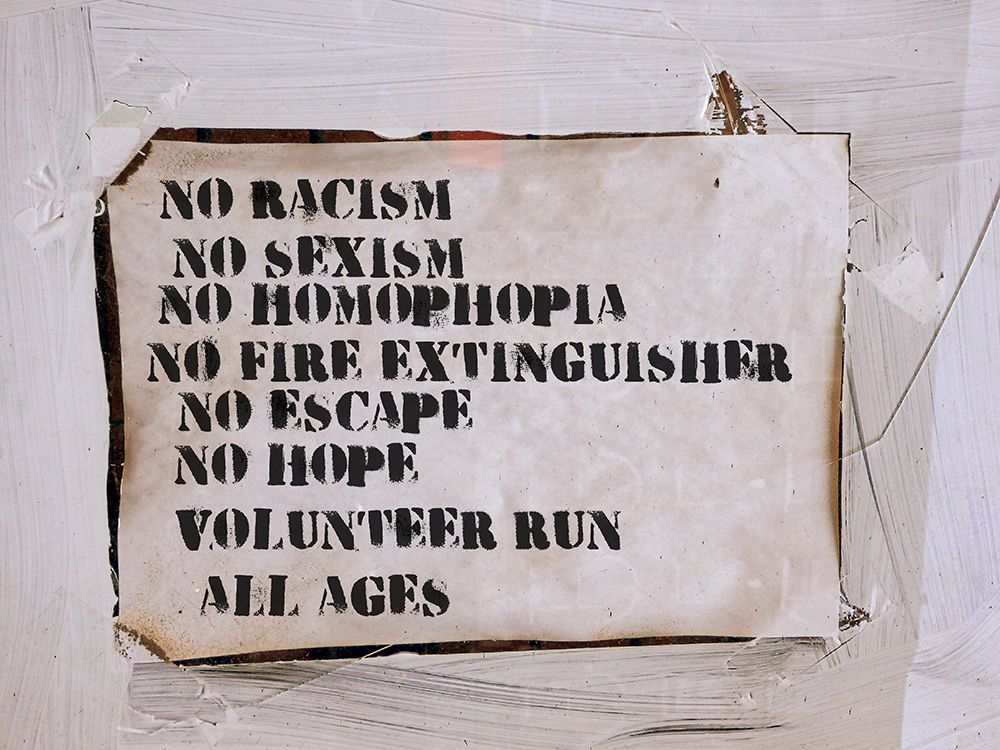 BERKELEY, Calif. – Founders of the Aphrodite Collective are locked in a heated battle with city officials over the future of their community space for artists and musicians. Advertised as a “safe space” for creative people free of sexism, racism and homophobia, the burgeoning venue has actually been declared a death trap by city inspectors.

Every night since the space opened six months ago, people have flocked to the Aphrodite Collective to exchange ideas – and to stare death right in the face. Located on the ground level of an abandoned World War II era commercial bakery and constructed out of thick concrete slabs on the Hayward fault line with only one dimly-lit entrance, the space is a disaster waiting to happen.

But the founders believe deeply in the importance of providing a space for artists to flourish free of judgement and persecution, and have vowed to fight the city. Founder Mary-Alice Walters told The Hard Times about the importance of such an inclusive space.

“We wanted to provide a safe space for all races, gender identities and sexual preferences to come and meet their fiery demise together,” Walters said.

Berkeley Fire Marshal Lance Palmer has fought to get the space shut down, claiming it is actually the most unsafe space he has ever encountered.

“There are multiple signs there saying ‘no racism, sexism or homophobia’. Which is all well and good, but it should continue to include no fire extinguishers, no running water and no emergency exits,” Palmer said after a recent inspection. “The rotting floor above holds extremely heavy machinery, and the exposed electrical wiring makes this place more like a tomb than an art space.”

Palmer isn’t the only city official who wants to see the building evacuated. City Building Inspector Thomas Cleary weighed in, “The foundation is more than just cracked – it’s practically powdered. One little tremor and this place is crumbling faster than Greg Ginn’s credibility. It’s a ticking time-bomb.”

Related: Punk Band Booked at Sober Space Makes Another Trip to the Van

Walters and other members of the collective have raised money to make improvements to the space in hopes to meet minimal safety codes.

“Our first fundraising effort was a massive success and we were able to dispose of nearly half of the discarded oily rags, stored in the back of the space by the previous tenant, in an environmentally conscious way,” Walters added, “The other rags, we used to help insulate some of the exposed copper wiring that had its insulation chewed away by the rats.”