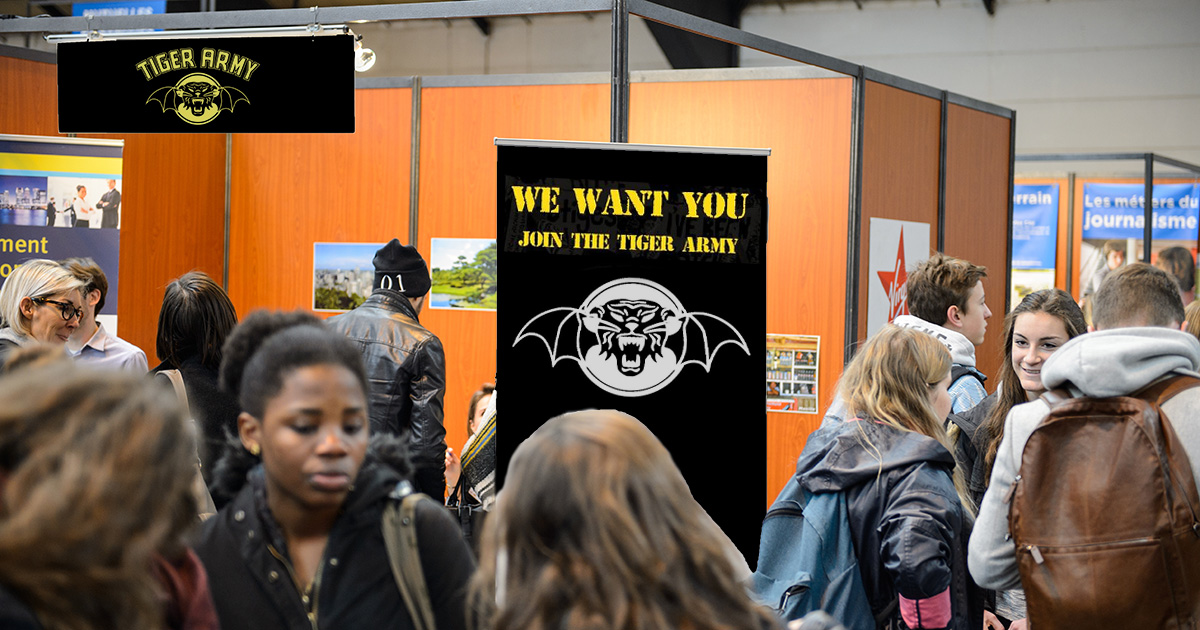 “We’ve always been a very small military body,” explained Sgt. Joel Mitchell, a Tiger Army recruiter. “But fewer people are joining up than ever before. We definitely got a spike after 9/11… mostly from confused guys looking to join the U.S. Army. I don’t know if it’s general disinterest in the military, or a genuine interest in psychobilly, but I can count on one hand the number of times a greaser sporting eyedrop tattoos and a motorcycle with bat wings walked into our career center in the last few years.”

“It’s sad, but these days we’d probably have to go by Tiger Antifa just to try to entice some new blood,” he added.

“Maybe new members aren’t joining as much as they used to, but it doesn’t matter because Tiger Army is still achieving everything we set out to,” the frontman explained. “Operation Pedal Steel is going exactly according to plan — we’re occupying more country-western venues, channels, and festivals than ever. And we’re beating the U.S. military in a lot of other ways: you’ll never find a Tiger Army vet rotting on the streets because the VA fucked them over. We take care of our own; why do you think our slogan is ‘Never Die?’”

However, a Tiger Army defector who asked to remain anonymous claimed she was tricked into joining by her local Tiger Army Recruiter in Santa Cruz.

“I thought I was joining a fucking fan club, obviously,” stated the defector. “I knew they were into occult shit, but I signed one contract in my blood, and the next thing I know I’m getting shipped off to basic training in a haunted mansion up in Marin and screamed at by some goth weirdo all day for not knowing how to twirl a switchblade. First chance I got, I stole a neon green 1930s Ford Model A pickup and never looked back.”

When asked if Tiger Army was planning to institute the draft to achieve their goal numbers, Sgt. Mitchell refused to comment.