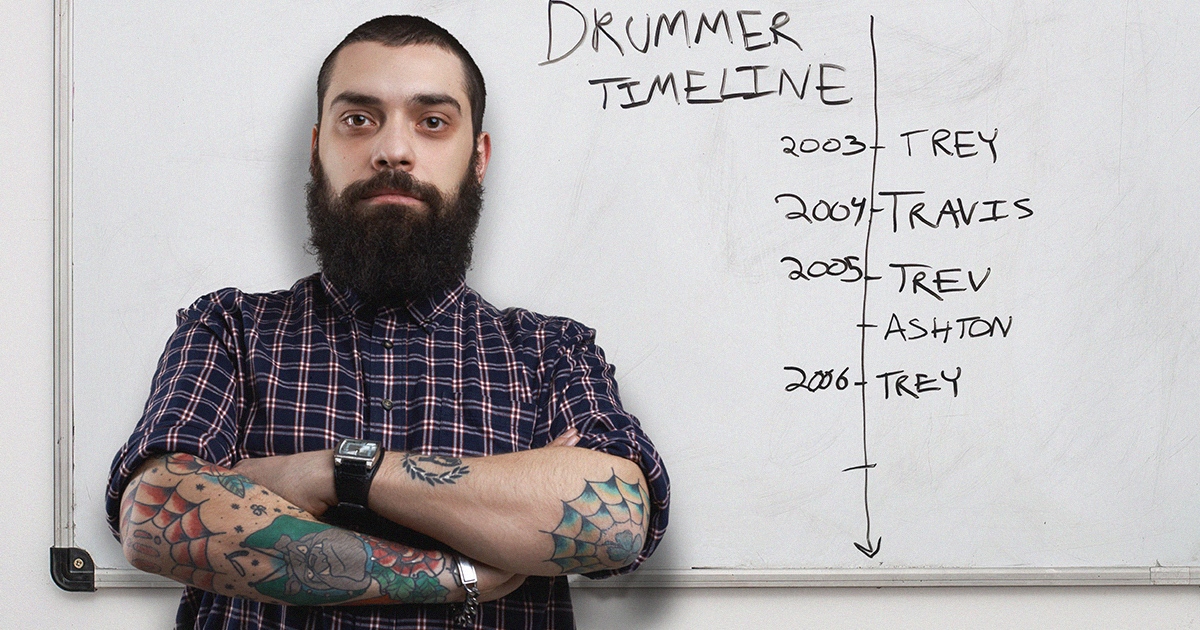 “We need Mrs. Arnold back,” said student Tommy Steenwyk. “It’s a bad sign when I’d rather learn about the Victorian era than hear some old guy talk about the time his band was supposed to open for something named Fugazi.”

The musician-turned-teacher thoroughly dissected every aspect of Machine Oil for his class, which included archival footage from the band’s YouTube page, quizzes on setlists, and listening sessions of the band’s music and influences.

“I want to make a difference in these kids’ lives, and introducing them to pure, non-commercialized rock’n’roll is the best way to do that,” said Slomsky. “I wanted to show them what mid-aughts western Michigan post-hardcore was like, and how important the scene was. I just wish I had more than 60 minutes with them. I could hardly fit in all the information.”

Unfortunately, many of the pupils found the class overwhelming, if not boring.

“Mr. Slomsky split the band’s history into eras based on the different drummers,” said Erica Gray, a student sporting a brand new Ed Sheeran shirt. “Apparently, there were 14 drummers in total. Three of them were named… Troy? Terry? Something like that. It’s really hard to get a handle on all of it — especially when the music sounded pretty awful.”

Meanwhile, Slomsky’s teaching methods have come under scrutiny from the PTA. One incident in particular, involving guest lecturer and former Machine Oil bassist Karen Platz last October, saw a report filed against Platz for “roughing up” a student.

“Sure, I yelled at the class. And I’d yell at them again if I had the chance,” said Platz when reached for comment. “I grabbed a kid by the shirt collar and screamed at him about the Nation of Ulysses. It was his fault! Dumbass couldn’t name even one of their albums. It’s disrespectful. They’re lucky [Steve] Albini wasn’t here — if he saw these kids, he’d kick their asses.”

The PTA is currently reviewing this incident, as well as the two Machine Oil LPs students were forced to listen to as homework.