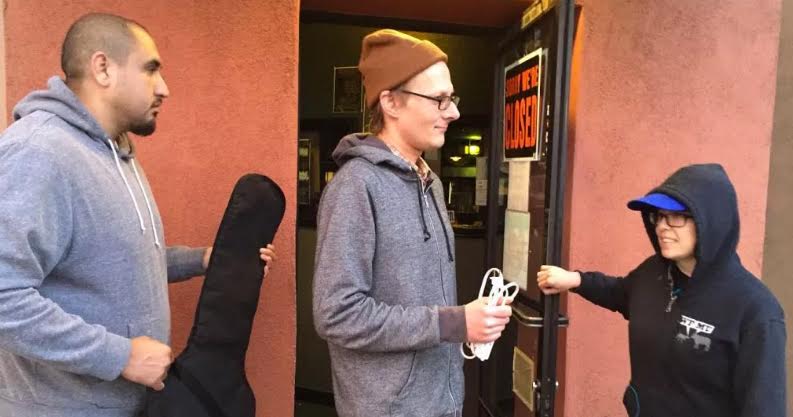 HUNTINGTON, W. Va. – Show promoter Mia Lamber began to suspect that the one guy loading in a single extension cord may not, in fact, be a member of the band he was “helping,” sources close to the tense situation confirmed.

“You wanna get a friend in or whatever, it’s really not a huge deal,” said Lambert while working the door of the show at the American Legion Post 16. “But when I saw four different people carrying in individual cymbals saying they were playing for Bounce! I started to pay attention. I mean I have known the dudes in that band since middle school, I think I know how many members they have.

Her suspicions were confirmed when scene regular Donny “Ronnie” Jacobs, most well known for being “that kid that let that other dude hit him with his own car,” attempted to walk in behind the band’s guitarist carrying only an extension cord.

“It’s just like, are you fucking kidding me right now, dude? It wasn’t even a heavy duty cord. It was six feet long and covered in cat hair and dust like he had grabbed it from under his bed,” Lambert stated. “And not to mention Ronnie is actually banned from this venue because last time his band played a show here he ended up throwing a bunch of live crabs into the audience, some of which ended up in the ceiling and really made the place smell ripe for a month or two.”

After members of Bounce! were only able to offer Lambert an unhelpful “I don’t know…” when questioned about Jacobs’s role in the matter, Lambert felt the trouble of confronting someone she describes as having an “arson-y vibe” wasn’t worth it and ultimately let it slide, yet remains dumbfounded by the entire ordeal.

“I mean, I guess I could see if it were some huge, sold-out show, but there are 26 people here, and it costs $5,” Lambert said. “You know what’s fucked up? This is actually a charity show to raise money for a no-kill animal shelter. Whatever.”

When asked for comment, Jacobs simply shrugged with an incredulous, “What?”