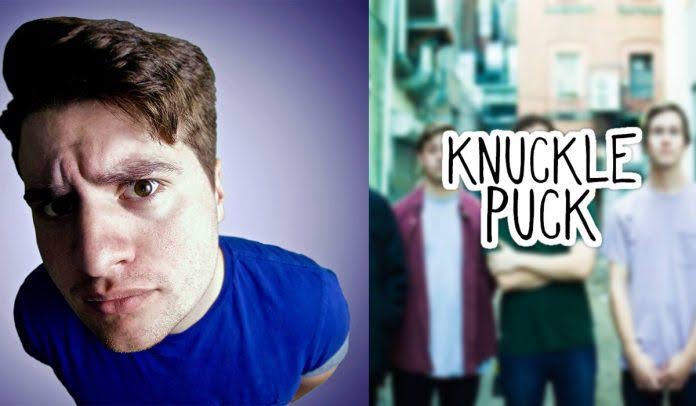 TWITTER – Comedian, and person who points a camera at his face a lot, Jarrod Alonge came under fire for selling a T-shirt parodying the band Knuckle Puck this week. Longtime fans of pop punk have called this beef the next Biggie vs. 2pac, while Knuckle Puck fans were forced to google what that means.

“Plagiarism is no laughing matter,” read an official statement from Knuckle Puck, who took their name from a Mighty Ducks movie. “Frankly, we are shocked that Jarrod (of all people) would make a joke out of pop punk.”

“You can’t just be inspired by something you see, and then kind of just parody it for your own benefit and pretend like it’s cool,” continued the statement from the band named after a line delivered by actor Keenan Thompson. “We spend all this time cultivating our image through pop culture references. So for him to take the brand we built up and cultivate his own image by referencing it is truly appalling.”

The harshly worded statement also included the phrase, “We invented arched words on shirts. Everyone knows that.”

“Pop punk is serious business,” said the band, whose name was directly lifted from the 1994 screenplay by Steven Brill. “Ever since we were kids and heard Blink 182 singing about fucking a dog in the ass, we knew pop punk was nothing to laugh about.”

“This is a call to all pop punk bands out there,” the statement concluded. “We should band together, take a stand against plagiarism, and let the world know that if you didn’t come up with something yourself, you should not use it. Defend pop punk!”

Update: In the wake of this tragic incident, the casualty total is two unfollowed and one blocked.