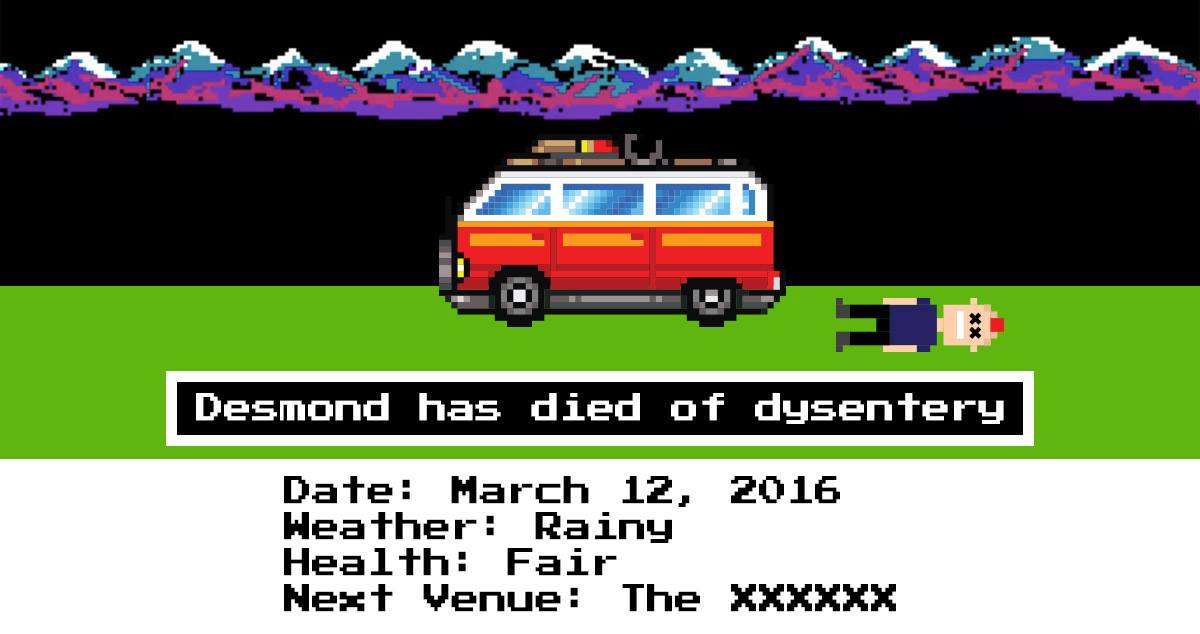 BEND, Ore. – A tour across the United States has turned tragic for seminal hardcore band, Fight Or Be Fought, who have lost their bassist to dysentery on the Oregon leg of their tour, according to the band’s spokesman.

“We started this tour in Independence, Michigan about 16 days ago,” said vocalist Jed Harris. “We stocked up on protein bars, baby wipes, and Gold Bond Medicated Powder. We thought we had enough provisions to last us the entire tour. We were wrong….so very, very wrong…” continued Harris, eyes fixed on the horizon with a look which belied a hidden horror.

The ill-fated tour did not even make it two days before encountering severe set-backs. “Our first show went really well. But on the way to the next gig we decided we should load up on spare tires for the van just in case,” said guitarist Curt Winters. “There was a sale at Midas and it sounded like a good idea at the time. Little did we know it ate up about 80 percent of our budget for Typhoid fever medicine and snake-bite anti-venom.”

The cursed tour limped along thereafter, according to first hand reports from the band and the very few audience members along the way. “On our way through Arizona our van broke an axle and we had to sit around Yuma for five days,” said a gaunt and weathered Harris. “But that wasn’t even the worst part — while we were waiting on the repairs a band of raiders looted our van. Our equipment, our personal belongings, and about 200 pounds of meat all gone — poof.”

The tour eventually wound its way into Oregon, but not before the band had suffered yet another series of casualties. “For some reason beyond comprehension Desmond decided to drink from a rusty rest stop water fountain… and boom, dysentery. Who the fuck gets dysentery? We all warned him,” Harris said, taking a bite of the frozen pizza he had been staring at. “No idea how we are going to get someone to fill in for the rest of the tour.”

While fighting his short battle with the disease, Desmond Long apparently exhausted the band’s supply of baby wipes before needing to use the band’s t-shirts as a substitute.

UPDATE: As of press time, guitarist Curt Winters had broken his leg. No one in the band could confirm how this happened.