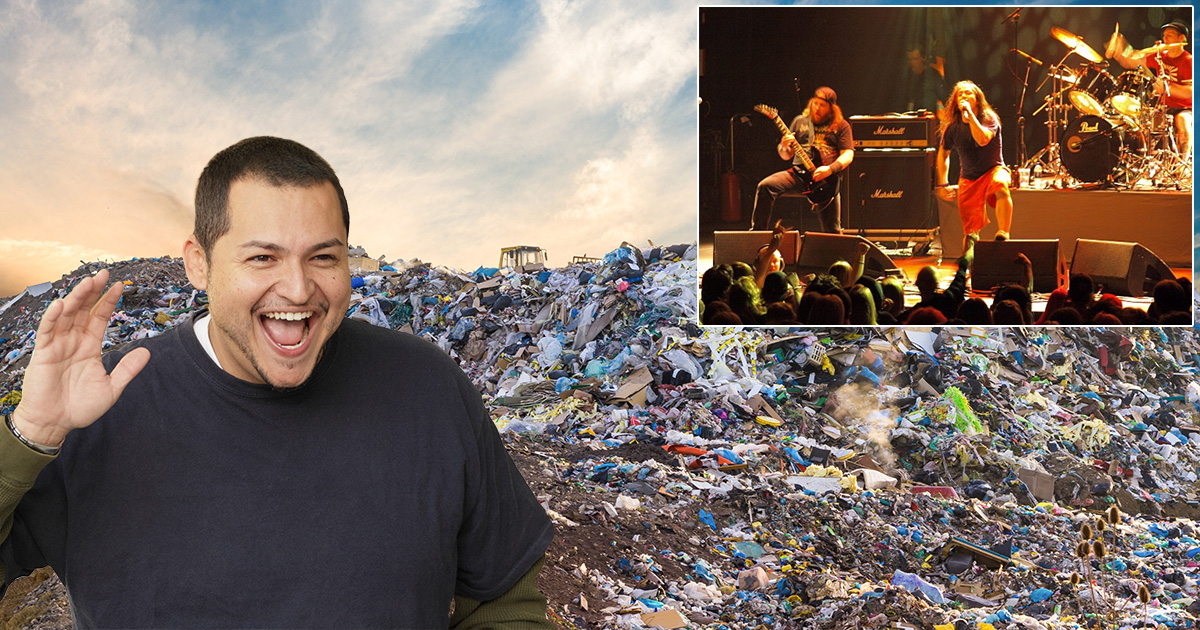 MINNEAPOLIS — Lifelong municipal waste enthusiast Rex Grunderson was overjoyed when recently discovered that there’s also a band with that name, sources confirmed at the Hennepin County Dump on Tuesday.

“Finally, the mainstream music industry is showing an interest in biomedical waste, discarded food, and construction debris…it’s about damn time!” shouted Grunderson while sifting through rusty pipes at a local scrapyard. “I’ve been obsessed with other people’s junk my whole life, so you can imagine how excited I was when some old guy under a highway overpass told me that there’s a band called Municipal Waste. I just hope they play my favorite genre of music, adult contemporary jazz.”

Municipal Waste, a thrash metal band from Richmond, Virginia, has apparently gained many misguided fans in this fashion over the years.

“Yeah, they show up at our concerts dragging trash cans and pushing shopping carts full of old car parts,” explained frontman Tony Foresta while purchasing a 12-pack of boogie boards. “They mean well, but they smell like shit, even by the standards of a metal show. And they sure as hell don’t buy any merch. Honestly, it’s our own fault for pigeonholing ourselves as a ‘garbage’ band. We never should’ve played the 2017 Sewage Treatment Festival with Trash Talk and Biohazard. The money was just too good, though.”

Grunderson may not be the only dumpster-diver drawn to Municipal Waste because of their name, but sources close to him confirm that he has a history of making similar mistakes.

“Dumping Rex was the best decision I ever made,” noted ex-girlfriend Anaya Chaudhary, while vacuuming under her couch cushions. “It’s been six months and I’m still cleaning up after his grimy ass. But yeah, he doesn’t know anything about music because he’s too busy scavenging landfills. When it comes to bands he just bases everything off the name and then claims to be a fan of them. Let’s just say he got into Pissed Jeans and Diarrhea Planet for all the wrong reasons.”

As of press time, Grunderson was headed back to the highway overpass to get more music recommendations and maybe pick up a hubcap or two.