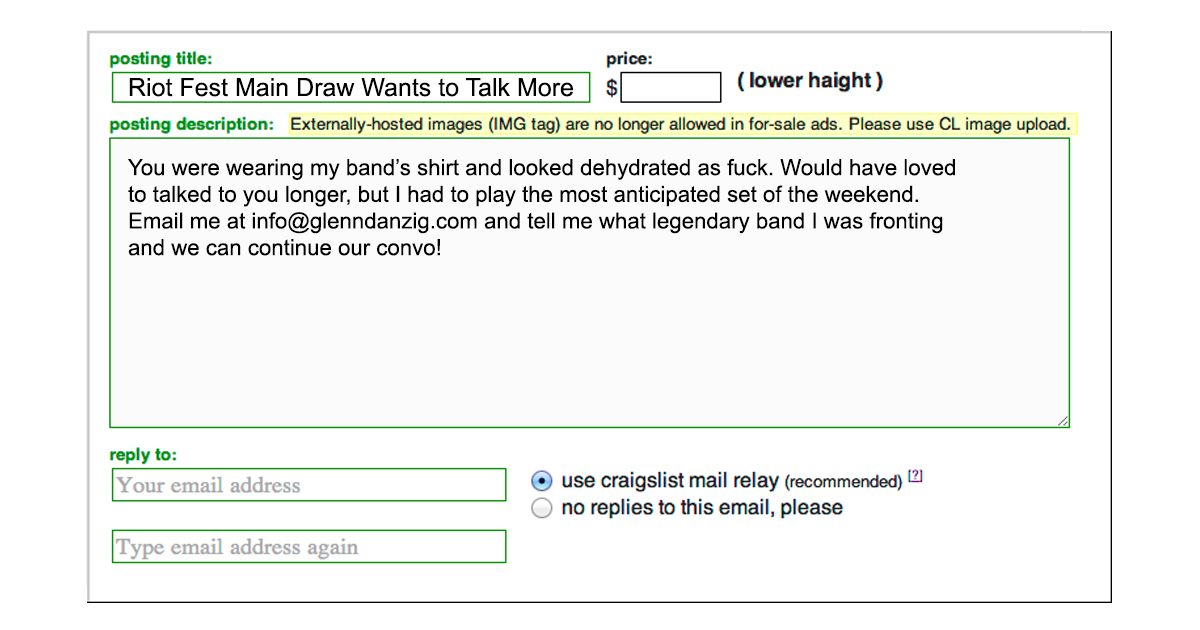 CHICAGO — A recent post on the anonymous Craigslist “missed connections” message board was clearly written by Misfits frontman Glenn Danzig, according to sources who discovered the post shortly after attending Riot Fest in Chicago this past weekend.

“You were wearing my band’s shirt and looked dehydrated as fuck,” the post began. “Would have loved to talked to you longer, but I had to play the most anticipated set of the weekend. Email me at [email protected] and tell me what legendary band I was fronting and we can continue our convo!”

The anonymous post was discovered a mere two hours after the Misfits wrapped up their set.

“It really forgoes the traditional style of vague details about a brief interaction and offers many blatant clues about the writer’s identity,” said John Bradford, author of three books about humans meeting up on online forums, and one of the first to claim the post was written by Danzig. “He displays all the trademarks of a missed connections poster: narcissism, entitlement, insecurity.”

Danzig unconvincingly denied originating the post when questioned. “A lot of those things mentioned could have been other bands at Riot Fest,” he stammered. “The Anniversary played a reunion set, right? Rob Zombie has pumpkins all over the stage, too, I bet!”

Brooke Simonetti, of the nearby suburb Elmhurst, believes the post may be intended for her. “I saw Glenn yelling at the sound guy and I couldn’t believe it! I had to go say hello. I’ve been a fan of his all my life.”

While thrilled to meet the punk rock icon, Simonetti indicated the desire for another potential encounter was not mutual. “We didn’t talk for very long. Most of the time we spent together, he just insisted that I should buy merch directly from him, because Riot Fest wouldn’t get a cut of the money that way. It was pretty weird, actually.”

Bradford noted the unlikelihood of any additional reunions for Danzig this week. “It’s too bad, really,” he said. “There hasn’t been a successful missed connections post since 2011, when Rod from Toledo reconnected with that ‘juggalo bitch with the thick ass’ he saw at Speedway.”