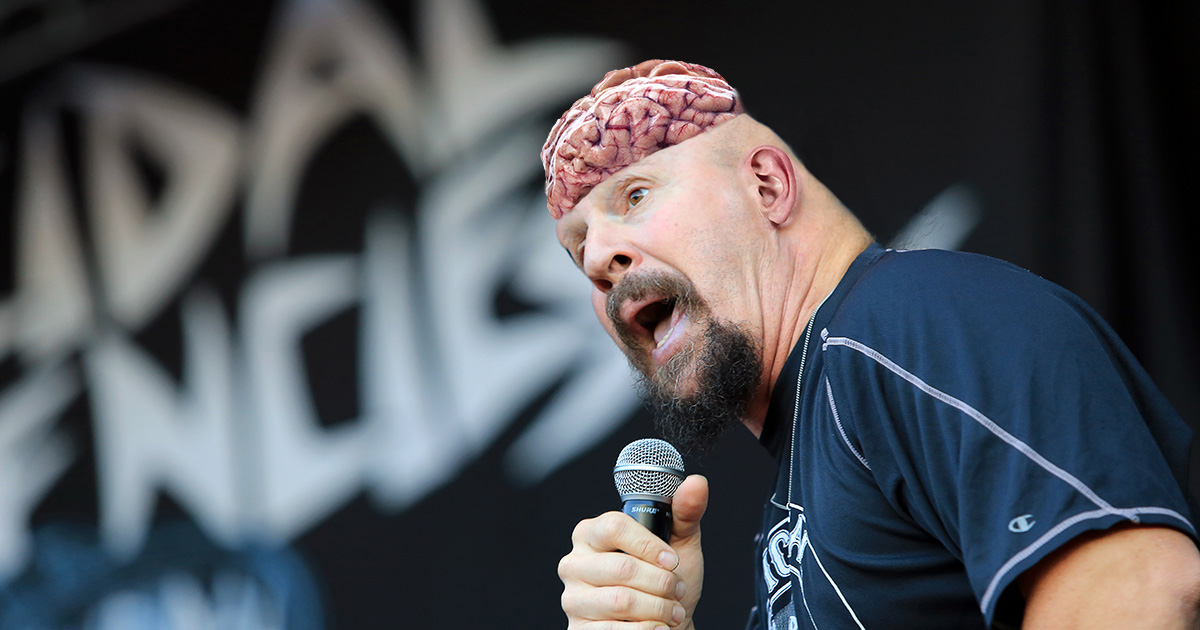 VENICE, Calif. — Suicidal Tendencies frontman Mike Muir horrified visitors at the boardwalk yesterday when he took off his trademark bandana to wipe sweat from his neck, only to show he was completely lacking the upper portion of his skull.

“My wife and I were eating some frozen yogurt when this large man walked right in front of us and said, ‘Boy, it’s a hot one, I could sure use a Pepsi,’” said local beachgoer Bernard Perez between bouts of vomiting. “Then he took off his bandana… and there was just this wrinkled pink mass of brain sticking out the top of his head. He tried making a little bit more small talk, but my wife kept screaming and asking him to get away. I’m not sure if this was some sort of science experiment gone wrong, or maybe he was just in a motorcycle accident and his brain hadn’t processed the trauma, but either way, I probably won’t ever sleep again.”

The incident was the first of many as of late, as Muir has finally come out into the open about his condition.

“Most people assume I was going bald like that guy from Poison, but honestly, I was born like this,” said Muir after doing a series of pullups at muscle beach. “I’ve always been very insecure about my exposed brain — when I was young, kids would poke it on the playground, or sometimes a nut would fall out of a tree and hit my frontal cortex and I’d forget where I lived. Doctors tried putting a metal dome on it, but that only made it more obvious. That’s when I discovered that a bandana actually looks pretty hardcore, and no one asked questions.”

Doctors say that, while it may look peculiar, Muir is in perfect health.

“While I am not pleased he just uses a piece of cloth over his grey matter, he is very good at keeping it clean and sanitary,” said Muir’s doctor, Dr. Jackie McDaniel, Ph.D. “He brushes his brain twice a day in a mixture of salt water and peroxide. Medical technology has advanced enough that he could do a scalp transplant, but Mike feels this is part of who he is now, and I applaud him for living his life to the fullest.”

Muir is looking forward to retirement, when he can wear a fisherman’s bucket hat to cover his malformation.