Is That Bald Guy Ian Mackaye? A Field Guide for Easy Identification 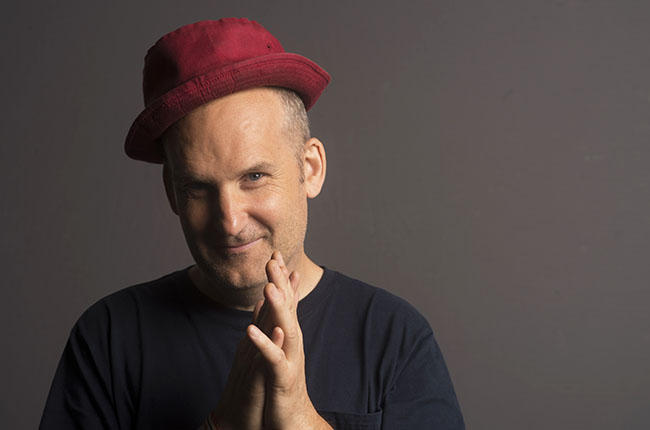 We’ve all experienced it- maybe while walking your dog through the park or looking through bargain bin records at the thrift store, or maybe you’re staring pensively into the middle distance thinking about what guitar pedal to buy next. Then, it happens: you spot a bald man who looks an awful lot like Ian Mackaye. But is it really Ian Mackaye? I’ve compiled some helpful tips to locate and identify that wiley rascal.

Ian is often being interviewed for documentaries about DIY music. If you spot a Documentary crew interviewing a bald guy, it’s likely that it’s Ian! BE WARNED THOUGH: If the documentary is about DMT or MMA the bald guy is almost certainly Joe Rogan. I do not recommend approaching unless you want your third eye pried open like an Arm Bar while listening to Joe scream about Horseshoe Theory.

Does He Look Tired From Doing-It-Himself?

There’s lots of bald guys in the world. However, Ian is well known for taking his DIY ethics almost insufferably seriously. That’s enough to tire anyone out! When observing the bald guy, look for dark circles under his eyes and glue on his fingers from staying up late putting together his own record sleeves. Does he look like maybe he got a good night’s sleep and has millions of underpaid workers across the country? Sorry, that’s not Ian. Thats Amazon CEO Jeff Bezos! Feel free to approach, but don’t let him get to comfortable around you. He could move his company to your city and drive up the price of rent.

How Much Of A Threat Is He?

Does the bald man appear to pose a threat to anyone around him? Is he an imposing figure? Are people actively moving away from him or nervous to approach him? If so, it’s definitely not Ian Mackaye. In fact, it’s Joe Rogan again. DO NOT APPROACH. Ian Mackaye is well known for being less of a threat. Like, a junior-level threat. Ian is a more of a threatening-but-not-as-threatening-as-other-types-of-threatening type.

Does He Seem Like He Might Suddenly Combine Major Elements of Different Genres, Ergo Creating A New Sound That Will Quickly Be Stolen And Commodified By Bands And Record Labels With The Sole Objective Of Making Money?

Ian Mackaye goes a lot of places and you could spot him anywhere, but there’s a few places where it’s more likely. Craft stores, DIY venues, and any store that sells Fedoras are a good place to start. Do you see a bald guy in a sports bar? If so, it’s more likely renown sportscaster Terry Bradshaw. Do you see a bald guy resting with his head down on a crooked front porch? If so, that’s Ian’s brother.

Your poser ass thought that was Ian? Fuck outta here.