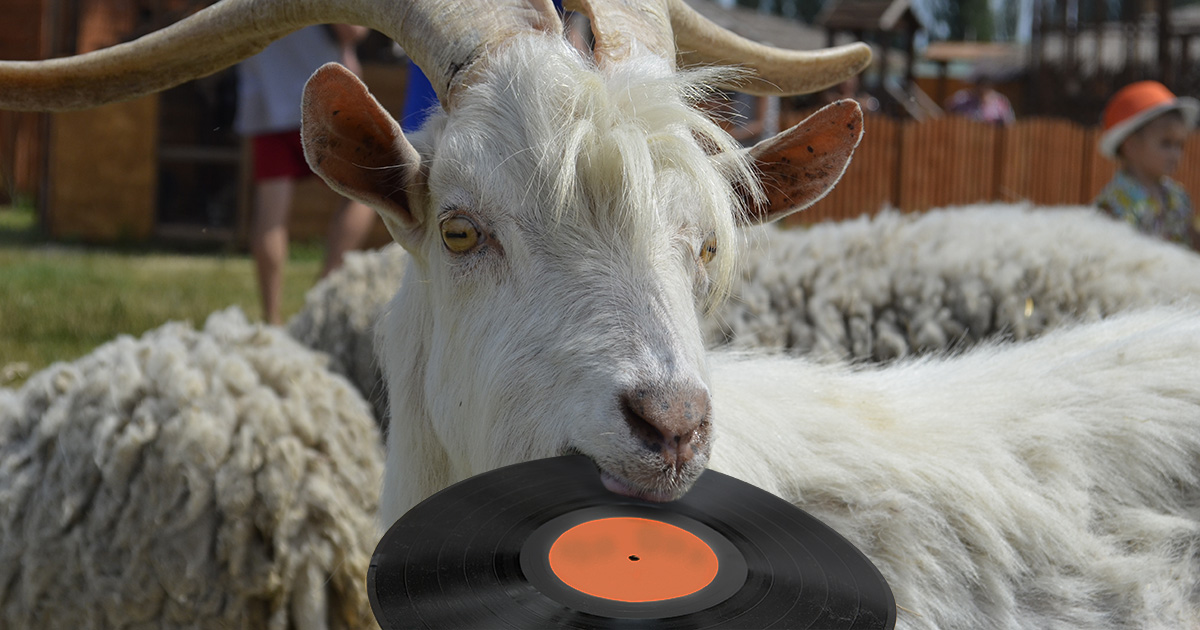 PLANO, Texas — Griffy, one of dozens of goats at the Pheldert Phamily Animal Experience in the Dallas suburbs, reportedly keeps his “indie credibility” intact by eating exclusively vinyl records, caretakers familiar with the goat confirmed this morning.

“Usually a goat’ll gnaw on damn near anything. Tin cans, old tractor tires, and what have you,” said Gordon Pheldert, lead farmer and spokesperson for the decidedly mute goat. “Heh. But not ol’ Griffy, though! Why, he ‘et up a distro’s worth of 45s since sun-up this mornin’.”

Griffy, who previously ate cassettes, CDs, and one young patrons’ iPod Nano, has clearly shown that vinyl is the way to go when it comes to ingesting physical media.

“He ‘specially likes the snaps and pops it makes when his little goat teeth bust through the lacquer, even though it turns some of the other goats off,” Pheldert said, tossing a thrift store copy of Herb Alpert & the Tijuana Brass’s Whipped Cream and Other Delights over the pen fencing. “If someone tries slippin’ him a sheet o’ paper with a download code, Griffy’ll stomp up a storm. Guess he just likes a ‘cleaner’ chew.”

Pheldert’s customers have begun bringing their own LPs to feed the two-year-old billie.

“If you traded your band’s 7” for our band’s 7” while we were on tour, chances are we totally fed it to Griffy the day we got back home,” said Tess Bridges, lead vocalist for local hardcore band Dire Circumstance. “Sometimes we have an entire crate, and he just sort of leafs through it with his hoof until he finds a particularly tasty colored vinyl. We just love that little guy.”

Griffy, marked by his knit scarf and frequent cigarette breaks, is allegedly expanding his palette, much to Pheldert’s dismay.

“Those old Delta blues 78s are dang hard to come by — especially near mint, like he’s starting to like ‘em,” Pheldert said from a rocking chair, watching the sun set. “I suppose he does his part, bringing the customers in and whatnot… but, Lord, do I live in fear of the day that goat learns how to order off Discogs.”