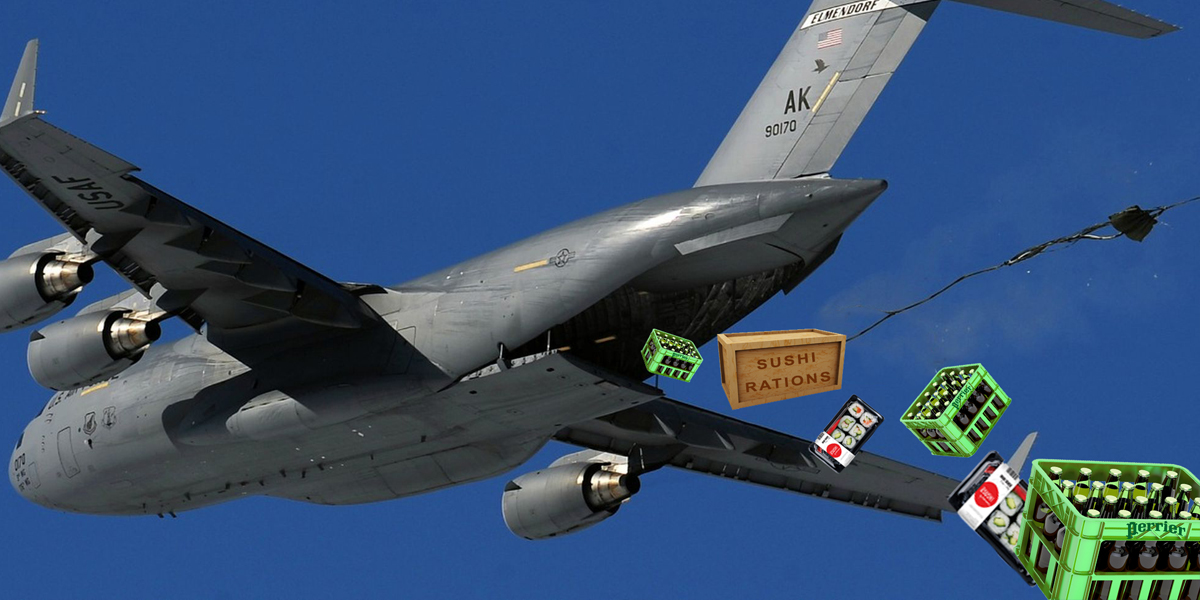 EXUMA, Bahamas — To quell the mounting unrest at Fyre Fest, humanitarian aid groups have begun airdropping sushi and fancy bottled water onto the botched luxury music festival, according to volunteers.

“The place was a disaster, it was worse than the time my Uber driver got us lost in Chicago. Then we heard a plane overhead and saw little take-out boxes with chopsticks taped to them, and green Perrier bottles with little parachutes floating down from the sky,” said Josh Turner, who paid $12,780 for the VIP experience package. “I was so happy to see people still care to treat us like humans. This wasn’t some crap like Dasani.”

“They said this would be a ‘selfie-takers paradise.’ Well, the last iPhone with a charge died hours ago, and the charging station is just a single Android charger, hooked up to jumper cables attached to a car battery. Nobody here would be seen with an Android phone,” said Miller. “And the ‘lodges’ are just white tents that look like the hazmat igloos they set up over dead bodies at crime scenes.”

Other VIP Experience ticket holders held an equally bleak assessment of the event.

“I thought I was going to be grinding on Ja Rule, drinking Cristal, and really soaking in the islands culture. Instead, I am probably going to get heatstroke and didn’t even get to hang with Travis Barker,” said social media manager Audrey Webber. “My dad is going to be so mad when I tell him what these people put me through.”

According to Webber, the situation seemed to be looking up as the supplies descended, until a pack of feral dogs arrived, attracted by the aid deposits.

“As soon as the sushi hit the ground, a pack of dogs moved in and wiped out half of the rations before we could even get to it. We barely managed to fight them off with spears we made from selfie sticks, and a drunk girl kept screaming ‘don’t hurt the nice doggies!’”