Hardcore Crew Member Resigns After No One Helps Him Move 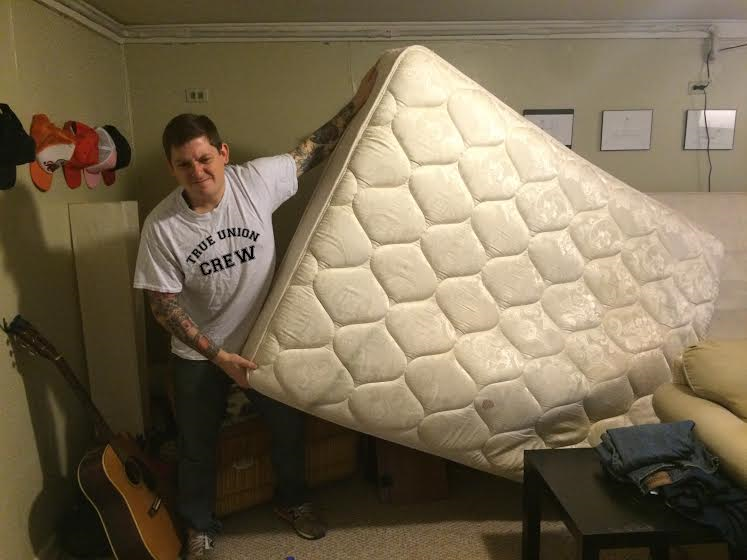 DOVER, Del. – After three years of steadfast allegiance, R.J. O’Brien has officially resigned from True Union Crew (TUC) after not one of the estimated 35 crew members offered to help him move to a new apartment four blocks down the street.

“Those guys were my brothers, and they fucking iced me,” said a sweaty, red-faced O’Brien, trying to figure out how to load his furniture into a rented U-Haul by himself. “I offered pizza and beer to anyone who could come by. Why I am even in a crew if no one is going to help me with this fucking couch?”

O’Brien claims to have gone “above and beyond” for his fellow crew members on numerous occasions, and doesn’t feel his efforts have been reciprocated.

“Whenever one of them went out of town, I would walk their dogs, water their plants, get their mail… I did it all,” O’Brien said begrudgingly. “I should have known they would do this. Two months ago I started swinging on some fool from Liberty Crew and got my jaw jacked up on a cheap shot, and my homies just left me on the sidewalk.”

Annoyed acquaintances confirmed O’Brien was ignored by his brothers-in-arms despite pleas via various forms of social media.

“I posted on Facebook saying I needed help. All I got were comments from cousins that live out of state saying ‘I would if I could.’ I fucking sent out messages and reached out on the TUC group text. All of them were marked ‘read,’ and not one of those dicks responded. And I know they were online because a couple of them were posting grainy memes two seconds later,” said O’Brien dejectedly. “I am starting to regret this ‘TUC, Friends, Family, Forever’ chest piece.”

Mark Fitzpatrick, a founding member of True Union Crew, elaborated on the lack of help provided to O’Brien.

“Yo, R.J. is a good kid and everything, but he isn’t really part of the crew. His dad runs a screen printing shop and he said he could get us some TUC shirts printed for free, so we let him have one… and that kind of went to his head.”

“Honestly… if he keeps running his gums about how he rolls with us this isn’t going to end well for him.”