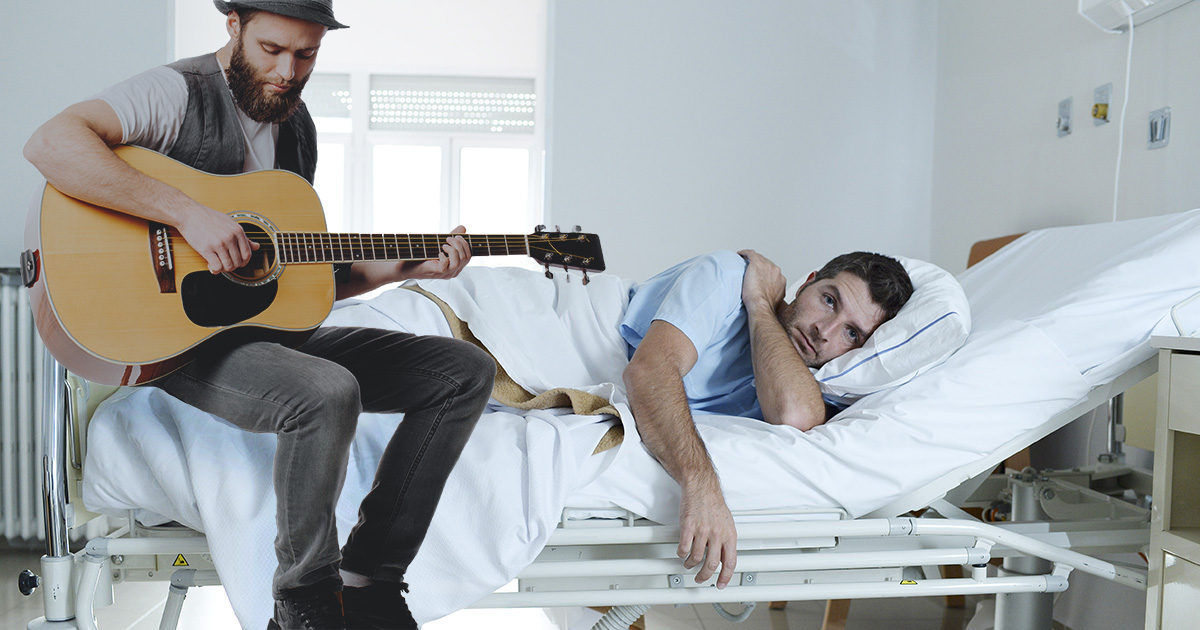 CHICAGO — Doctors at UChicago Medicine were stunned last night when Spoonful guitarist Mike Murdoch awoke from a 46-day coma to berate his bandmate for playing out of tune at his bedside, medical records confirm.

“Honestly, I was an hour away from trying to convince his family to pull the plug and harvest his organs,” said Dr. Marissa Patton of the comatose patient who was injured while leaving an irate voicemail for his bassist while driving. “Something about his friend’s shitty rendition of Elliott Smith’s ‘A Fond Farewell’ hit something deep inside Mr. Murdoch that transcends modern science.”

Murdoch is reportedly known for critiquing the by-ear tuning of his fellow band members during rehearsals, performances, and recording sessions, despite using a digital tuner himself.

“They say people in comas can still hear you,” said Spoonful bandmate and drummer Ben Faber. “So, I brought my acoustic to play a few songs for my best friend. Next thing I hear is Mike saying, ‘Jesus christ, man… you call that a G?!’ It was a miracle, like we got the old Mike back — exciting and obnoxious at the same time. So many emotions.”

Meanwhile, musicians holding a candlelight vigil outside the hospital claimed Faber’s playing was “good for a drummer” and “college bonfire-level quality” — with which several members of the nursing staff agreed before admitting that they “aren’t really music people.” However, it proved to be the exact method needed to pull Murdoch back from the precipice of death.

“I was flying towards this brilliant white light when I heard this awful noise… and something told me to go back, that I had unfinished business,” Murdoch told loved ones from behind an oxygen mask. “How about you use the GoFundMe you set up for my medical bills to buy Benny some guitar lessons?”

At press time, Murdoch had unfortunately fallen back into a coma after Faber punched him in the face after for calling his chord progression “sloppy.”