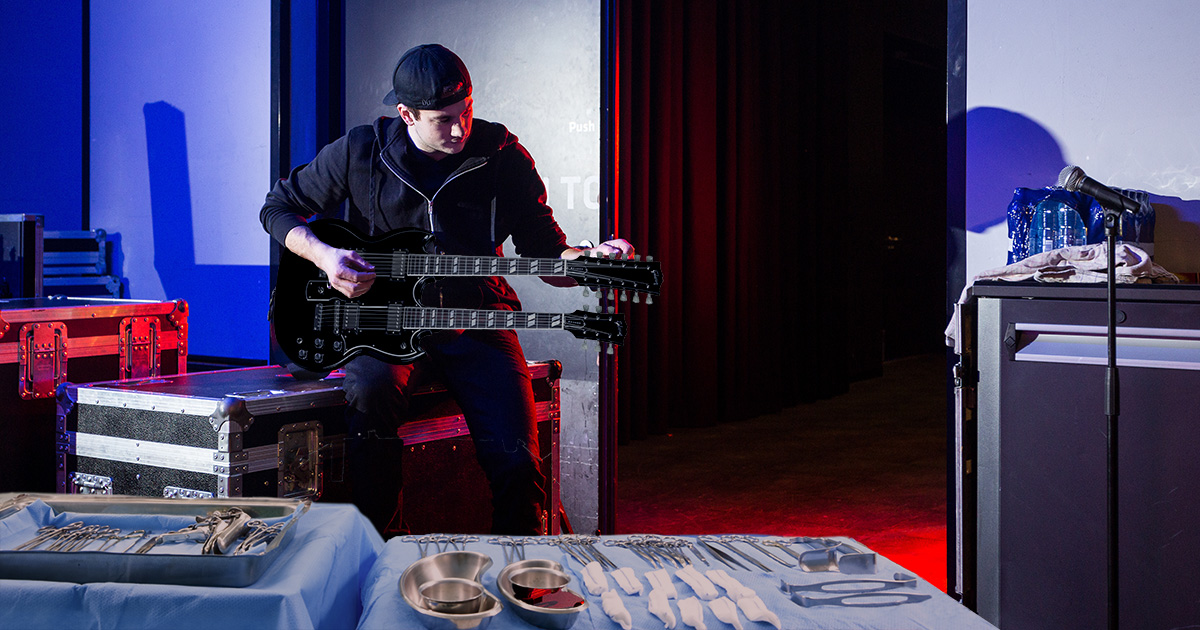 “What we had here was an issue of quality of life. Kurt had extreme strain on his lower back, and playing it was contributing to accelerated disc degeneration,” said Dr. Sheila Ortiz, Head of Audiosurgery. “I know a few European guitar techs have successfully completed the procedure, and I knew that time was running out for him to ever live a normal life again if we didn’t act fast.”

Inspired by Steve Vai, Carstens initially bought the double-necked guitar off of Craigslist from an aging rocker who claimed to have once roadied for the band Anvil.

“My band, Armored Oppressor, had a gig at the Mason Jar last week… and I had to lay down on the floor of the green room for the rest of the night when we were done. While my bandmates were partying and talking to chicks, I could barely move,” said Carstens. “Supporting two guitars like that every night was wearing me down, mentally and physically. Lying on that floor, I knew I needed help.”

Dr. Ortiz admitted she was initially hesitant to perform the procedure.

“I made a very strong bid for him to leave the guitar as is — I was transparent about the risks. Most importantly, I warned him how it would affect its resale value,” she said. “When Kurt assured me that this was what he wanted, and that there was a 12-pack of Schlitz in it for me, I knew what I had to do.”

But despite Dr. Ortiz’s best efforts, the guitar was a complete loss, with both halves rendered useless.

“I should’ve seen the red flags… she talked about the dangers of a protracted truss rod, and I didn’t even question why she was wearing a stethoscope,” said Carstens. “I should’ve just traded it in at Guitar Center for store credit.”