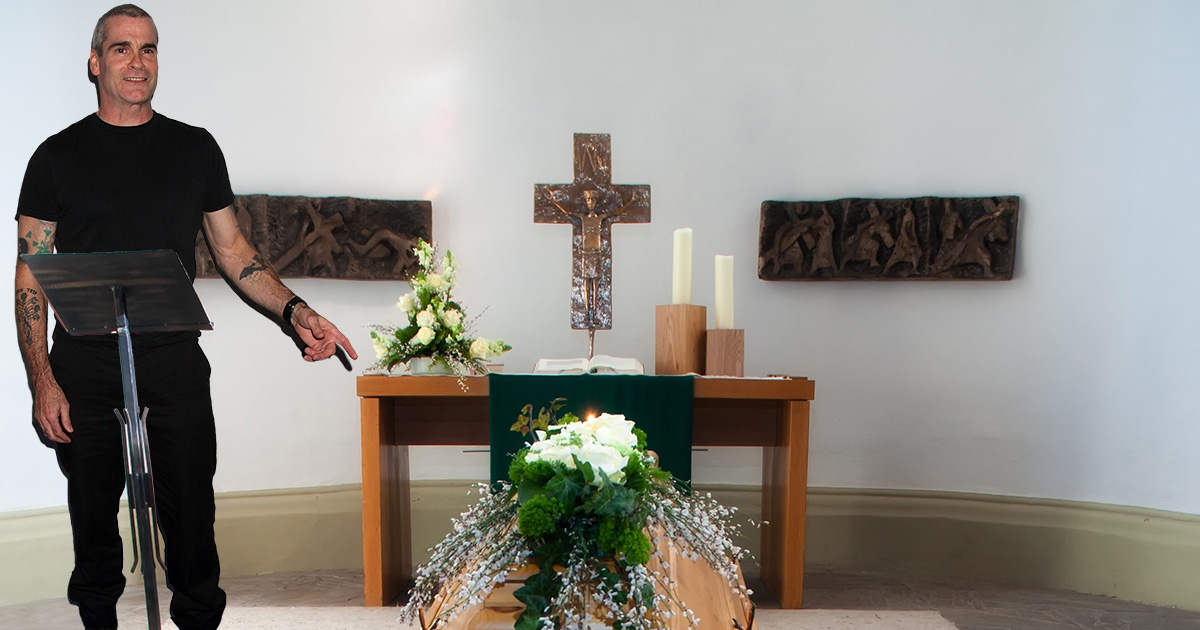 “I was saddened by the news that such a respected figure in the punk scene had died,” said Henry Rollins while giving a live demonstration on quad exercises. “I believe it’s important to remember and keep fond memories of those who have passed…but it’s just as important to remember how vital our lower halves are in our workout routines. I mean, I wouldn’t want people seeing my corpse with full bustling biceps and tiny little Q-tip legs. And unfortunately, Alex’s open casket funeral was a stark reminder of that.”

Coworker and funeral attendee Allison Lee weighed in on the goings-on of the funeral procession.

“I came to pay my respects to my coworker, and I heard some angry punk guy was doing the service. Little did I know I’d be sitting through what was basically a 45-minute meatheaded Ted Talk,” explained Lee. “His delivery was a bit stern, and the pit stains on his black t-shirt were a bit distracting, but I did walk out of there really thinking about how little I focus on my calves and thighs. Never would I have thought I’d walk out of a funeral considering buying a leg press, but here I am!”

Funeral director John Greenwood explained how Henry Rollins has become a regular around the funeral home.

“Mr. Rollins has become a bit of a staple here at Greenwood’s Funeral Home whether we like it or not,” said Greenwood. “Typically, he just goes on and on clearly rehearsing some material for his spoken word. This time, however, it was a lot more touching and heartfelt. When he was up there spouting scathing remarks about Lopez and the attendee’s lackluster leg conditions, I really think he was just simply looking out for us all, despite all the pulsating veins popping from his neck and forehead suggesting otherwise.”

At press time, Henry Rollins was seen giving a stern speech to the pallbearers at the funeral on how they could enhance their abilities with a bit more chin-up reps.